Life Of Lord Nuffield, The – A Study In Enterprise & Benevolence

The story of his parentage and boyhood are simply told. His early business struggles are described, and the progression from agent and repairer to bicycle maker, to motor-cycle maker, to garage proprietor and car manufacturer.

The history of Morris Motors Ltd. and the wider Nuffield Organization is covered in considerable detail for the early days and especially for the period when it was under the close personal control of Lord Nuffield. The book carries on the story of these businesses in more general terms down to 1952, when the amalgamation of Morris and Austin took place, and Lord Nuffield retired from the Chairmanship and became Honorary President of the British Motor Corporation. The last part of the book deals with Lord Nuffield’s great benefactions.
xvi, 356 p. : ill. ; 23 cm #0921 (Prev. ownership stamps, some scars to cloth.)
Nuffield, William Richard Morris, Viscount, 1877-1963. | Automobile industry and trade — Great Britain — History.
WRM Motors Ltd began in 1912 when bicycle manufacturer William Morris moved on from the sale, hire, and repair of cars to car manufacturing. He planned a new light car assembled from bought-in components. In this way he was able to retain ownership by keeping within the bounds of his own capital resources.

A factory was opened in 1913 at former Oxford Military College at Cowley, Oxford, United Kingdom where Morris’s first car, the 2-seat Morris Oxford “Bullnose” was assembled.[2] Nearly all the major components were bought in.
Morris Motors Limited was a British privately owned motor vehicle manufacturing company formed in 1919 to take over the assets of William Morris’s WRM Motors Limited and continue production of the same vehicles. By 1926 its production represented 42 per cent of British car manufacture—a remarkable expansion rate attributed to William Morris’s practice of buying in major as well as minor components and assembling them in his own factory. Self-financing through his enormous profits Morris did borrow some money from the public in 1926 and later shared some of Morris Motors’ ownership with the public in 1936 when the new capital was used by Morris Motors to buy many of his other privately held businesses.

Though it merged into larger organisations in 1952, the Morris name remained in use until 1984, when British Leyland’s Austin Rover Group decided to concentrate on the more popular Austin brand. 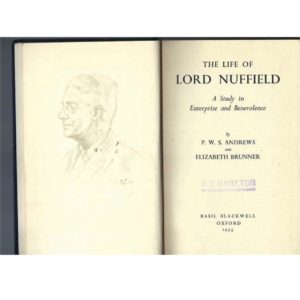 Life Of Lord Nuffield, The – A Study In Enterprise & Benevolence