First Edition. 214 p., [8] p. of plates : ill., maps ; 22 cm. #0921 Naufrage volontaire. English. Voyages and travels. | Atlantic Ocean. Survival.
Alain Bombard (French pronunciation: ​[alɛ̃ bɔ̃baʁ]; Paris, 27 October 1924 – Paris, 19 July 2005) was a French biologist, physician and politician famous for sailing in a small boat across the Atlantic Ocean without provision. He theorized that a human being could very well survive the trip across the ocean without provisions and decided to test his theory himself in order to save thousands of lives of people lost at sea.
On October 19, 1952, Bombard began his solitary trip across the Atlantic Ocean to the West Indies, after visiting his newborn daughter in France. He had sailed in the Atlantic Ocean solo before, from Tangier to Casablanca (August 13 – August 20), and from Casablanca to Las Palmas (August 24 – September 3). However the original plan was to sail across the Atlantic with a friend, English yachtsman Jack Palmer, with whom he sailed just before from Monaco to Menorca (May 25 – June 11), but Jack abandoned Alain in Tangier. Bombard sailed in a Zodiac inflatable boat called l’Hérétique (“the heretic”), which was only 4.5 metres (15 ft) long, taking only a sextant and almost no provisions.

Bombard reports he survived by fishing (and using fish as source of both fresh water and food) with a self-made harpoon and hooks, and harvesting the surface plankton with a small net. He also drank a limited amount of seawater for a long period on his trip. On the October 23, the fourth day of the journey Bombard had to mend a torn old sail, while the backup sail was blown away. He also made a major navigation mistake which made him believe that he was sailing much faster than he actually was. On the fifty-third day of the journey he encountered a ship. The crew told him that he was still over 1,000 kilometres (620 mi) short of his goal. However, after the ship’s crew offered him a meal, Bombard decided to go on. Bombard reached Barbados December 23, 1952, after 4,400 kilometres (2,700 mi) of travel. Bombard had lost 25 kilograms (55 lb) and was briefly hospitalized. He published a book about his trip entitled Naufragé Volontaire in 1953.

Bombard’s claim was later tested and contested by Hannes Lindemann, a German physician, canoeist and sailing pioneer, although both the French and Taiwanese navies concurred with Bombard’s findings, the Taiwanese exercise extending to 134 days. Lindemann wanted to repeat Bombard’s trip in order to gain a better understanding of living on salt water and fish, but found that he needed fresh water (from rain) most days. Lindemann later claimed that Bombard had actually taken along fresh water and consumed it on the ocean, and that he had also been secretly provided further supplies during his voyage. Lindemann’s own observations about reactions to scarce fresh water supplies became the basis for the World Health Organization’s navigation recommendations. However, it appears that Bombard may have been misunderstood in regard to the possibility of survival without fresh water. Bombard never argued that human survival is possible only by drinking seawater. On the contrary, he indicated that seawater in small quantities can prolong survival if accompanied, if rainwater is not available, by the absorption of liquids present in the bodies of fish. Bombard’s legacy is still debated; in any case, an inflatable survival raft is still very often called a “bombard” in French, in memory of the doctor’s adventure in the Atlantic. 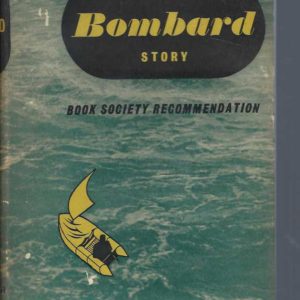