Dutch East India Company;
Dutch East India Company – Commerce;
Netherlands – Commerce – History;
Verenigde Oostindische Compagnie;
The Dutch East India Company, officially the United East India Company (Dutch: Vereenigde Oost Indische Compagnie[f]; VOC), was a mega-corporation founded by a government-directed consolidation of several rival Dutch trading companies (voorcompagnieën) in the early 17th century. It is believed to be the largest company to ever have existed in recorded history. It was established on March 20, 1602, as a chartered company to trade with Mughal India[11][disputed – discuss] in the early modern period, from which 50% of textiles and 80% of silks were imported, chiefly from its most developed region known as Bengal Subah. In addition, the company traded with Indianised Southeast Asian countries when the Dutch government granted it a 21-year monopoly on the Dutch spice trade.

The company has been often labelled a trading company (i.e. a company of merchants who buy and sell goods produced by other people) or sometimes a shipping company. However, the VOC was in fact an early-modern corporate model of vertically integrated global supply chain and a proto-conglomerate, diversifying into multiple commercial and industrial activities such as international trade (especially intra-Asian trade),shipbuilding, and both production and trade of East Indian spices,[2] Indonesian coffee, Formosan sugarcane, and South African wine. The company was a transcontinental employer and a corporate pioneer of outward foreign direct investment in the early modern world. At the dawn of modern capitalism, wherever Dutch capital went, urban features were developed, economic activities expanded, new industries established, new jobs created, trading companies operated, swamps drained, mines opened, forests exploited, canals constructed, mills turned, and ships were built. In the early modern period, the Dutch were pioneering investors and capitalists who raised the commercial and industrial potential of underdeveloped or undeveloped lands whose resources they exploited, whether for better or worse. For example, the native economies of pre-VOC-era Taiwan and South Africa were virtually undeveloped or were in almost primitive states. In other words, the recorded economic history of South Africa and Taiwan both began with the VOC period. It was VOC people who established and developed first urban areas in the history of Taiwan (Tainan) and South Africa (Cape Town and Stellenbosch).

Founded in 1602, the Dutch East India Company (VOC), started off as a spice trader. In the same year, the VOC undertook the world’s first recorded IPO. “Going public” enabled the company to raise the vast sum of 6.5 million guilders quickly. The VOC’s institutional innovations and business practices[27][28][29] laid the foundations for the rise of modern-day global corporations and capital markets that now dominate the world’s economic systems.[30] In the early 1600s, by widely issuing bonds and shares to the general public,[g] VOC became the world’s first formally listed public company.With its pioneering institutional innovations and powerful roles in global business history, the company is often considered by many to be the forerunner of modern corporations. In many respects, modern-day corporations are all the ‘direct descendants’ of the VOC model. Its 17th-century institutional innovations and business practices laid the foundations for the rise of giant global corporations in subsequent centuries – as a highly significant and formidable socio-politico-economic force of the modern-day world – to become the dominant factor in almost all economic systems today. It also served as the direct model for the organisational reconstruction of the English/British East India Company in 1657. The company, for nearly 200 years of its existence (1602–1800), had effectively transformed itself from a corporate entity into a state or an empire in its own right. One of the most influential and extensively researched business enterprises in history, the VOC’s world has been the subject of a vast amount of literature that includes both fiction and nonfiction works.

Japanese export porcelain plate (Arita ware) with the VOC’s monogram logo
The company was historically an exemplary company-state[k] rather than a pure for-profit corporation. Originally a government-backed military-commercial enterprise, the VOC was the wartime brainchild of leading Dutch republican statesman Johan van Oldenbarnevelt and the States-General. From its inception in 1602, the company was not only a commercial enterprise but also effectively an instrument of war in the young Dutch Republic’s revolutionary global war against the powerful Spanish Empire and Iberian Union (1579–1648). In 1619, the company forcibly established a central position in the Javanese city of Jayakarta, changing the name to Batavia (modern-day Jakarta). Over the next two centuries the company acquired additional ports as trading bases and safeguarded their interests by taking over surrounding territory. To guarantee its supply, the company established positions in many countries and became an early pioneer of outward foreign direct investment.[l] In its foreign colonies, the VOC possessed quasi-governmental powers, including the ability to wage war, imprison and execute convicts, negotiate treaties, strike its own coins, and establish colonies.[62] With increasing importance of foreign posts, the company is often considered the world’s first true transnational corporation. Along with the Dutch West India Company (WIC/GWIC), the VOC was seen as the international arm of the Dutch Republic and the symbolic power of the Dutch Empire. To further its trade routes, the VOC-funded exploratory voyages, such as those led by Willem Janszoon (Duyfken), Henry Hudson (Halve Maen), and Abel Tasman, revealed largely unknown landmasses to the western world. In the Golden Age of Netherlandish cartography (c. 1570s–1670s), VOC navigators and cartographers helped shape geographical knowledge of the world as we know it today.

Socio-economic changes in Europe, the shift in power balance, and less successful financial management resulted in a slow decline of the VOC between 1720 and 1799. After the financially disastrous Fourth Anglo-Dutch War (1780–1784), the company was nationalised in 1796 and finally dissolved on 31 December 1799. All assets were taken over by the government with VOC territories becoming Dutch government colonies. 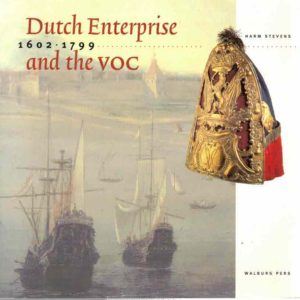