The loss of the coastal liner Yongala in March 1911 became one of Australia’s most mysterious shipwrecks, for it was not until the late 1950s that the wreck of the Yongala was positively identified.The mystery about the lost ship was not so much the cause of the disaster, but why this fine and seaworthy vessel was lost in tempestuous wearther when only a short distance from Townsville while on a regular voyage from Melbourne to Cairns, via Sydney and Brisbane and calling at several intermediate ports en route. Her loss occurred after a brief call at McKay, bound for Townsville 208 miles to the north. She never arrived. There were no survivors from the 121 passengers and crew aboard, making this one of Australia’s most tragic shipwrecks. Max Gleeson, a veteran diver who has been down to the wreck many times, has produced an excellent account of the circumstances of the Yongala’s loss, of the initial (and susbsequent) searches for the ship, addressed the many theories advanced as to the cause of loss, the official inquiries that followed, details of the ship’s senior officers as well as providing an account of what conditions must have been aboard on that fateful night and examining the possible scenarios for the disaster. The exact cause remains uncertain today, but Max Gleeson has covered all the options in this well-presented, comprehensive publication. pp. 120 First Edition illusts #0218 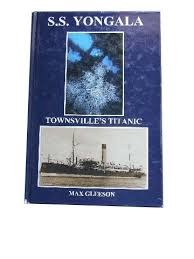