Acceptable signs of age. Tight, firm copy. Robert Montgomery (1807–1855) was an English poet, the son of Robert Gomery. He was educated at a private school in Bath, Somerset, and founded an unsuccessful weekly paper in that city. In 1828 he published The Omni-presence of the Deity, which hit popular religious sentiment so exactly that it ran through eight editions in as many months. In 1830 he followed it with The Puffiad (a satire), and Satan, or Intellect without God. An exhaustive review in Blackwood’s by John Wilson, followed in the thirty-first number by a burlesque of Satan, and two articles in the first volume of Fraser, ridiculed Montgomery’s pretensions and the excesses of his admirers. But his name was immortalized by Macaulay’s famous onslaught in the Edinburgh Review for April 1830, an annihilating so Jove-like that the victim automatically commands the spectator’s rueful sympathy.”[1] This review did not 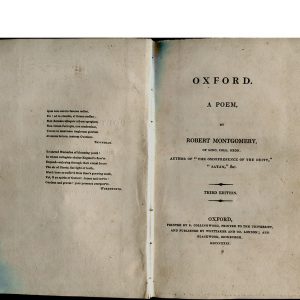