Home › Shop › CARS Automobiles Motorcycles › How and Where of the 8-litre BENTLEYS, The

How and Where of the 8-litre BENTLEYS, The

The Bentley 8 Litre was a large inline-6 cylinder super-luxury car made in various configurations by Bentley Motors Limited at Cricklewood, London. Announced 15 September 1930, it was also the last completely new model by Bentley before the company’s financial collapse and forced sale to Rolls-Royce Limited.

A Bentley 4 Litre featuring a 4-Litre Inline-6 engine in a shortened chassis was announced on 15 May 1931.

Introduced a year into the Great Depression. the 8-litre and its smaller 4-litre sibling were unable to turn the company’s finances around. Less than nine months after the 8-litres introduction, Bentley Motors was placed into receivership.
Announced on 15 September 1930[4] and launched at the London Olympia Motor Show in October 1930,[3] the 8 Litre Bentley was noted for its tractability and smoothness; it could be driven from walking pace to highway speeds in top gear without effort.[13][9]

Only 100 of these cars were made,[5][13] of which 35 were on the shorter wheelbase and 65 were on the longer wheelbase.[13] Fewer than 25 were fitted with open bodies. It is suggested that the cost of the development of the car was a prime reason for Bentley Motors going bankrupt.[16]

When Rolls-Royce bought Bentley Motors from the receiver[20] in November 1931,[21] it discontinued production of the 8-Litre[13][12] and disposed of all spare parts for it.
1st Edition. 32 page booklet, 5.5 x 8.5″ #221021 The book seeks to trace the ownership histories of the wonderful 8 litre Bentleys listing Chassis Numbers, owners, registration numbers, body types, coachbuilders, previous owners, miscellaneous information and photographs where these could be found. 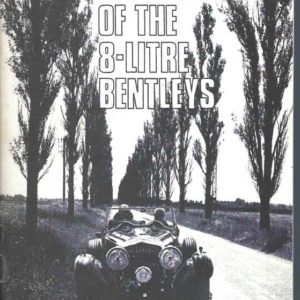 How and Where of the 8-litre BENTLEYS, The