Goblin Market (composed in April 1859 and published in 1862) is a narrative poem by Christina Rossetti. The poem tells the story of Laura and Lizzie who are tempted with fruit by goblin merchants.[1] In a letter to her publisher, Rossetti claimed that the poem, which is interpreted frequently as having features of remarkably sexual imagery, was not meant for children. However, in public Rossetti often stated that the poem was intended for children, and went on to write many children’s poems. When the poem appeared in her first volume of poetry, Goblin Market and Other Poems, it was illustrated by her brother, the Pre-Raphaelite Brotherhood artist Dante Gabriel Rossetti.

Goblin Market tells the adventures of two close sisters, Laura and Lizzie, with the river goblins.

Although the sisters seem to be quite young, they live by themselves in a house, and draw water every evening from a stream. As the poem begins, the sisters hear the calls of the goblin merchants selling their fantastic fruits in the twilight. On this evening, Laura, intrigued by their strangeness, lingers at the stream after her sister goes home. (Rossetti hints that the “goblin men” resemble animals with faces like wombats or cats, and with tails.) Longing for the goblin fruits but having no money, the impulsive Laura offers to pay a lock of her hair and “a tear more rare than pearl.”

Laura gorges on the delicious fruit in a sort of bacchic frenzy. Once finished, she returns home in an ecstatic trance, carrying one of the seeds. At home, Laura tells her sister of the delights she indulged in, but Lizzie is “full of wise upbraidings,” reminding Laura of Jeanie, another girl who partook of the goblin fruits, and then died at the beginning of winter after a long and pathetic decline. Strangely, no grass grows over Jeanie’s grave. Laura dismisses her sister’s worries, and plans to return the next night to get more fruits for herself and Lizzie. The sisters go to sleep in their shared bed.

The next day, as Laura and Lizzie go about their housework, Laura dreamily longs for the coming meeting with the goblins. That evening, however, as she listens at the stream, Laura discovers to her horror that, although her sister still hears the goblins’ chants and cries, she cannot.

Unable to buy more of the forbidden fruit, Laura sickens and pines for it. As winter approaches, she withers and ages unnaturally, too weak to do her chores. One day she remembers the saved seed and plants it, but nothing grows.

Months pass, and Lizzie realises that Laura is wasting to death. Lizzie resolves to buy some of the goblin fruit for Laura. Carrying a silver penny, Lizzie goes down to the brook and is greeted warmly by the goblins, who invite her to dine. But when the merchants realise that she has no intent to eat the fruit, and only intends to pay in silver, they attack, trying to feed her their fruits by force. Lizzie is drenched with the juice and pulp, but consumes none of it.

Lizzie escapes and runs home, but when the dying Laura eats the pulp and juice from her body, the taste repulses rather than satisfies her, and she undergoes a terrifying paroxysm.

By morning, however, Laura is fully restored to health. The last stanza attests that both Laura and Lizzie live to tell their children of the evils of the goblins’ fruits, and of the power of sisterly love.

The poem has inspired disparate interpretations. James Antoniou wrote in his 2020 Canberra Times article that “while the sheer lusciousness of the goblins’ ‘sugar-baited words’ undercuts the moral [of restraint and sisterly love], the strange contradictions of the story itself repel any easy allegorical readings.”[2]

Critics in the late 1970s viewed the poem as an expression of Rossetti’s feminist and homosexual politics.[3] Some critics suggest the poem is about feminine sexuality and its relation to Victorian social mores. In addition to its clear allusions to Adam and Eve, forbidden fruit, and temptation, there is much in the poem that seems overtly sexual,[4] such as when Lizzie, going to buy fruit from the goblins, considers her dead friend Jeanie, “Who should have been a bride; / But who for joys brides hope to have / Fell sick and died”, and lines like, “She sucked their fruit globes fair or red”; and “Lizzie uttered not a word;/ Would not open lip from lip/ Lest they should cram a mouthful in;/ But laughed in heart to feel the drip/ Of juice that syruped all her face,/ And lodged in dimples of her chin,/ And streaked her neck which quaked like curd.”

The poem’s attitude toward this temptation seems ambiguous, since the happy ending offers the possibility of redemption for Laura, while typical Victorian portrayals of the “fallen woman” ended in the fallen woman’s death. Rossetti volunteered at Highgate Penitentiary for fallen women shortly after composing Goblin Market in the spring of 1859.[5]

Some critics believe that some feminist interpretations of the work leave out an anti-semitic nature within the poem. The critic Cynthia Scheinberg believes the Goblins to be “Hebraic”, anti-semitic and anti-Judaic characters that the tested Christian sisters Laura and Lizzie must face in order to transition into wholesome and complete young women.[6]

Other critics focus not on gender but on the Victorian consciousness of a capitalist critique of the growing Victorian economic market, whether in relation to sisters’ Lizzie and Laura’s interaction with the market as gendered beings, the agricultural market, or in the rapid increase in advertising the “Market”.[7] When Goblin Market was released in April 1859, most Victorians weren’t able to purchase fresh fruit, a historical note of importance when reading the poem for Victorian agriculture and tone.[7]

According to Antony Harrison of North Carolina State University, Jerome McGann reads the poem as a criticism of Victorian marriage markets and conveys “the need for an alternative social order”. For Sandra Gilbert, the fruit represents Victorian women’s exclusion from the world of art.[8] Other scholars – most notably Herbert Tucker – view the poem as a critique on the rise of advertising in pre-capitalist England, with the goblins utilising clever marketing tactics to seduce Laura. J. Hartman, among others, has pointed out the parallels between Laura’s experience and the experience of drug addiction. Another interpretation has observed an image of Jesus Christ in Lizzie when she says: “Eat me, drink me, love me.”[4] This is imagery used to identify Christ’s sacrifice in communion services.

The poem uses an irregular rhyme scheme, often using couplets or ABAB rhymes, but also repeating some rhymes many times in succession, or allowing long gaps between a word and its partner. The metre is also irregular, typically (though not always) keeping three or four stresses, in varying feet, per line. The lines below show the varied stress patterns, as well as an interior rhyme (grey/decay) picked up by the end-rhyme with “away”. The initial line quoted here, “bright”, rhymes with “night” a full seven lines earlier.

But when the noon waxed bright
Her hair grew thin and grey;
She dwindled, as the fair full moon doth turn
To swift decay, and burn
Her fire away. 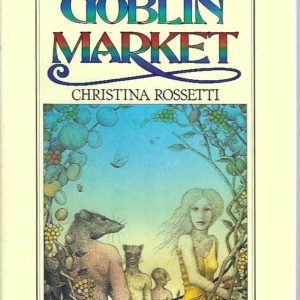