The definitive book on china half-figures; hundreds illustrated, described and coded . 608 p. : ill. (part col.) ; 29 cm. & price guide (19 p.) Bookplate and bookshop label on prelims. Large heavy item, likely to incur additional postage cost if ordered via Abebooks. #0221Half dolls are just that—generally the upper half of a human figure without legs. Half dolls were produced without legs so that they could be attached to something useful—very commonly, pincushions, but also whisk brooms, tea cozies, and numerous things that could grace a ladies dressing table, such as powder boxes.The vast majority of half dolls were produced between 1900 and the 1920s, although some were produced earlier than that and some later. Some half dolls are still reproduced today.Most half dolls were produced in Germany by firms such as Dressel & Kister, F. W. Goebel, Ernst, Bohne & Sohne, Heubach, Hertwig, Karl Schnider, and many others. Japan also flooded the market with inexpensive models.Most half dolls are between two and six inches tall, although there are smaller and also a few larger examples.Half dolls are generally made of porcelain (glazed bisque, sometimes called china) although there are also models made in unglazed bisque. Half dolls have also been made out of composition, wax, and many other materials.Half dolls are often found unmarked, marked Germany or “Made in Germany,” or with a four- or five-digit mold number. Models from Japan can be marked “Japan” or “Made in Japan”. Only a few companies such as Dressel & Kister and F. W. Goebel would sometimes mark half dolls with their company’s distinctive mark.Simple, crudely painted half dolls from Japan or Germany with close arms are priced at no more than $20 to $30. A good German half doll with arms away or nice detailing and clothing can be valued at $100 to $300-plus; half dolls with elaborate hair and rare accessories can bring several hundred dollars. Some Dressel & Kister or Ernst, Bohn & Sohne half dolls can be several thousand dollars. Chocolate ladies on the market can vary from $400 to $2,000-plus depending on the maker.There are so many thousands of styles of half dolls made and so few good reference books available, that many doll collectors throw up their hands in frustration and feel that half dolls and their values are nearly impossible to decipher. That is not true—with a keen eye and a few basic facts about half dolls and half doll pricing, any collector can start to understand the fascinating area of half doll collecting.The complexity of the mold used to make the half doll is very important. The more complex the mold used, generally, the more valuable the half doll. Simple half dolls with arms “close” to the torso (no separation of arms from the torso, made with two mold pieces) are generally the least expensive. Next are half dolls with “open and returning arms,” which show some separation between the arms and the torso. The most desirable have “arms away,” which have arms modeled completely away from the body of the half doll and which generally require complex molds.The painting of the half doll also contributes to price differences. Delicately and precisely painted half dolls are worth more than those with crude painting. Although most crudely painted half dolls were made in Japan, many budget models were also made in Germany, so having a half doll marked “Germany” is no guarantee of quality.The third major factor in half doll desirability is the type and complexity of the modeled clothing and hair as well as the accessories the half doll is holding. More complex clothing (ruffles, hats, and feathers) and more complex hairdos add to the value. Also, is the doll holding an accessory? A famous accessory that increases the value of half dolls greatly is a “chocolate tray” with a pot of hot chocolate and a cup. Other desirable accessories can include delicate grooming items, small animals, flowers, and flower baskets.(Please note: Over standard weight. Orders may incur additional postage charges. We will contact you prior to processing order to request your approval or contact us to confirm postage cost.) 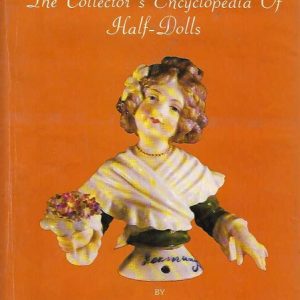