MINT COPY! Following the events of INFINITE CRISIS, the Big Three of the DC Universe each took a year away from their superhero duties. It was a year without Superman, a year without Batman, a year without Wonder Woman, a year without the Justice League. But it wasn’t a year without heroes. Geoff Johns, Grant Morrison, Greg Rucka and Mark Waid pen the weekly, yearlong series that redefined not only the DC Universe but what exactly it means to be a hero.
After Infinite Crisis, the DC Universe had its most eventful year ever. It was a year without Superman, Batman or Wonder Woman…but not a year without heroes This massive hardcover collects the entire year-long run of the weekly series 52!
Geoff Johns is Chief Creative Officer of DC Entertainment. He has written highly acclaimed stories starring Superman, Green Lantern, The Flash, Teen Titans and The Justice Society of America. He is the author of the New York Times bestselling graphic novels GREEN LANTERN- RAGE OF THE RED LANTERNS, GREEN LANTERN- SINESTRO CORPS WAR, JUSTICE SOCIETY OF AMERICA- THY KINGDOM COME and SUPERMAN- BRAINIAC, and is the author of DC Comics’ biggest, most recent events, BLACKEST NIGHT and BRIGHTEST DAY. Johns has also written episodes of the TV series Smallville and Robot Chicken.Writer Grant Morrison is known for his innovative work on comics from the graphic novel ARKHAM ASYLUM to acclaimed runs on ANIMAL MAN and DOOM PATROL, as well as his subversive creatorowned titles such as THE INVISIBLES, SEAGUY and WE3. He has also written best-selling runs on JLA, SEVEN SOLDIERS OF VICTORY and New X-Men and recently helped to reinvent the DC Universe in ALLSTAR SUPERMAN, 52 and BATMAN. He is currently writing the Vertigo series JOE THE BARBARIAN, BATMAN AND ROBIN and THE RETURN OF BRUCE WAYNE.
#141021 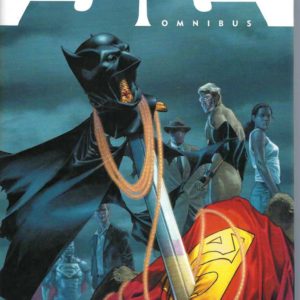