Naughty and Nice: The Good Girl Art of Bruce Timm

AS NEW. At an amazingly low price! In a radical departure from his previous work on animated films and comics featuring superheroes, the award-winning artist Bruce Timm presents an extensive survey of the many forms that his muse has assumed in his mind’s eye. Naughty and Nice: The Good Girl Art of Bruce Timm showcases nearly 300 full-color, line and pencil images of partially clothed and nude women of almost every conceivable description and temperament, some accompanied by Timm’s comments.
Naughty and Nice presents an extensive survey of Bruce Timm’s celebrated “after hours” private works. These tastefully drawn nudes, completed purely for fun, are showcased in this exquisite new release. This volume boasts over 250 full-color, line and pencil images of partially clothed and nude women of almost every conceivable description and temperament. Timm blends his animation style with his passion for traditional good-girl art for an approach that is unmistakably all his own. This substantial tome provides shapely forms and earthly delights throughout its pages. Be it a sophisticated city gal or a savage jungle queen, a hard-boiled dame or even an elegant lady from a fantastic land, his subjects prove that Timm’s creativity has no limits. Furthermore, his clean lines and graceful…
Over 125 new images have been prepared especially for this handsome book. Timm explores the female form with absolute creative freedom, and pure personal expression is the result. The artist has granted Flesk Publications unprecedented access to his archives to provide the best representation of his private works. These rarely seen images span the last 15 years and are showcased in a single collection for the first time.
Bruce Timm is an Emmy Award-winning artist, writer, director and producer who has been working in the animation field for nearly three decades. The majority of his career has focused on the DC Animated Universe for Warner Bros. Animation.Beginning with Batman: The Animated Series in 1992, Timm’s character designs and vision have had a substantial impact that redefined the genre of superhero animated TV shows and movies–an influence that continues to this day.His contributions include key roles working on the TV series Superman: The Animated Series, The New Batman Adventures, Batman Beyond and Justice League. Timm has served as producer or executive producer for over a dozen animated films, including Wonder Woman, Justice League: Crisis on Two Earths, All-Star Superman and Batman: Year One.Timm also enjoys the occasional work in comics. He is the recipient of two Eisner Awards. His first was in 1994 for the art on Batman Adventures: Mad Love, which won for Best Single Issue. He contributes covers, pin-ups and stories to various titles as his time permits. Past contributions include Avengers, Batman Adventures, Captain America: Red, White and Blue, Conan, Harley and Ivy, Tom Strong’s Terrific Tales, Vampirella and Fantastic Four: World’s Greatest Comics Magazine.Bruce is currently working as executive producer on the new Green Lantern: The Animated Series and the upcoming film Justice League: Doom.
pp. 256 #141021 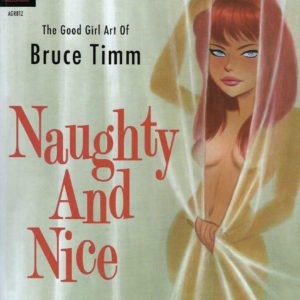 Naughty and Nice: The Good Girl Art of Bruce Timm