Secret Identity: The Fetish Art of Superman’s Co-creator Joe Shuster showcases rare and recently discovered erotic artwork by the most seminal artist in comics, Joe Shuster. Created in the early 1950s when Shuster was down on his luck after suing his publisher, DC Comics, over the copyright for Superman, he illustrated these images for an obscure series of magazines called “Nights of Horror,” published under the counter until they were banned by the U.S. Senate. Juvenile deliquency, Dr. Fredric Wertham, and the Brooklyn Thrill Killers gang all figure into this sensational story.The discovery of this artwork reveals the “secret identity” of this revered comics creator, and is sure to generate controversy and change the perception of the way we look at Clark Kent, Lois Lane, Lex Luthor, and Jimmy Olsen forever. The book includes reproductions of these images, and an essay that provides a detailed account of the scandal and the murder trial that resulted from the publication of this racy material. pp. 160 illusts9780810996342 “Startling. . . this fascinating collection adds a new dimension to a hidden history.”–Miami Herald E04 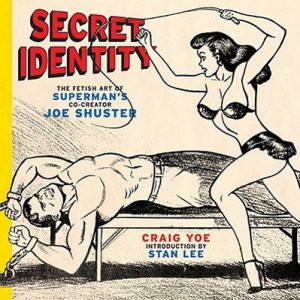