Dust to Gold. The inspiring story of Bendigo station home of Shrek

Shrek may be the star of Bendigo Station, but the back-story of the station is rich and fascinating, from its earliest days as the scene of New Zealand’s richest quartz reef gold strike in the 1860s to its establishment as a 11,000 hectare sheep station producing many of New Zealand’s highest quality top price Merino clips. As well as this it’s now home to several leading Pinot Noir vineyards, public walkways, a historic reserve and fishing and game hunting.None of this recent development would have come about if it weren’t for the far-sighted, entrepreneurial and innovative owners, John and Heather Perriam. They took on Bendigo in the late 1970s after the Clyde Dam project forced them off the nearby family farm. They had spent several years in ultimately fruitless battles with bureaucracy, trying to stop the dam project from going ahead.Things weren’t easy at Bendigo Station either. Chief among their problems was a rabbit plague which was costing the station close to $120,000 a year in poisoning and shooting. In the late 1990s the property was the centre of farmer-led initiatives that led to the formation of Merino New Zealand. Added to that has been the multi-million-dollar transformation of the lower slopes into what’s now seen as a significant new wine area.But the Perriams still run merinos on their higher country and John says that’s something he hopes will never change. His latest venture is developing a company to promote the strong wools of New Zealand in the same way that his earliest organization did for merino wools. (Bookshop Label on half-title page) 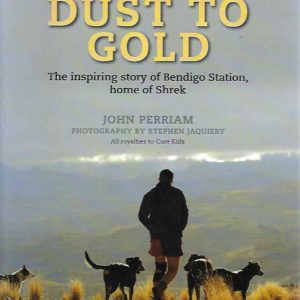 Dust to Gold. The inspiring story of Bendigo station home of Shrek