Wisdom of Birds, The : An Illustrated History of Ornithology

For thousands of years people have been fascinated by birds, and today that fascination is still growing. In 2007 bird-watching is one of the most popular pastimes, not just in Britain, but throughout the world, and the range of interest runs from the specialist to the beginner. In The Wisdom of Birds, Birkhead takes the reader on a journey that not only tells us about the extraordinary lives of birds – from conception and egg, through territory and song, to migration and fully fledged breeder – but also shows how, over centuries, we have overcome superstition and untested ‘truths’ to know what we know, and how recent some of that knowledge is. It was only in the nineteenth century that the ancient belief that swallows hibernated under water (!) finally gave way to general acceptance of the facts of migration. In the same century of dazzling experimental science, even Darwin chose not to dwell on the sexual promiscuity of female birds to spare the blushes of his daughter, who was helping to correct the proofs of The Descent of Man.
Conceived for a general audience, and illustrated throughout with more than 100 exquisitely beautiful illustrations, many of them rarely, if ever, seen before, The Wisdom of Birds is a book full of stories, knowledge and unexpected revelations.

‘There are plenty of writers who have an understanding of natural science, and there are plenty of scientists who try to write. But there are precious few with the combined abilities of Professor Tim Birkhead. His instinct for the stories within ornithology and his gift for making technical matters accessible and simple are rare talents indeed.’ Mark Cocker, naturalist and co-author of ‘Birds Britannica’ PRAISE FOR ‘THE RED CANARY’ ‘His expert grasp of the science involved is to be expected from a professor of behaviour and evolution. What is more surprising is his capacity to make it not just comprehensible, but fascinating.’ New Statesman ‘In relating this complex story, Tim Birkhead reveals much of himself as well as his topic, and he is an entertaining communicator.’ The Times

Tim Birkhead is a professor at the University of Sheffield where he teaches animal behaviour and the history of science. He is a Fellow of the Royal Society of London and his research has taken him all over the world in the quest to understand the lives of birds. 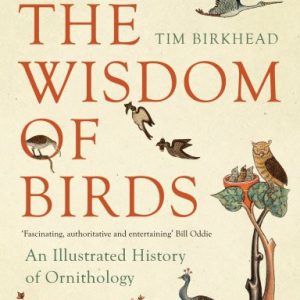 Wisdom of Birds, The : An Illustrated History of Ornithology