All City Writers: The Graffiti Diaspora

The title, ALL CITY WRITERS, describes a vast research on the Writing movement, focusing particularly on the process of its exportation from New York to all of Europe during the ’80s. The first part of the research analyzes how graffiti in media such as movies, videos, magazines, and books from New York influenced Europe. When images of the New York subway arrived in London, Paris, Munich, and Amsterdam, a huge milestone was set: A first generation of European graffiti writers started to follow the letters, the method, the techniques, and the general lifestyle of New York in the ’70s.

The book, a massive volume of more than 400 pages, has been conceived as an imaginary newspaper. The chronicles it contains have not been penned by real journalists or narrators but by people who.. 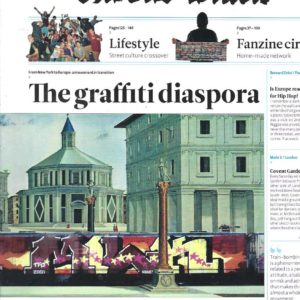 All City Writers: The Graffiti Diaspora