This is a history of the 10-gun brig and survey ship, HMS Beagle. It became famous for her survey voyages under Commander Robert Fitzroy, especially once Charles Darwin, a passenger on the second expedition, wrote the On the Origin of Species, which was based on studies undertaken during the voyage.

As part of the renowned Anatomy of the Ship series, this book provides the finest documentation of the Beagle, with a complete set of superb line drawings, supported by technical details and a record of the ship’s service history.

pp. 126, illusts #090422 (name on fep, bookshop receipt on endpp.)
HMS Beagle was a Cherokee-class 10-gun brig-sloop of the Royal Navy, one of more than 100 ships of this class. The vessel, constructed at a cost of £7,803 (roughly equivalent to £638,000 in 2018), was launched on 11 May 1820 from the Woolwich Dockyard on the River Thames. Later reports say the ship took part in celebrations of the coronation of King George IV of the United Kingdom, passing through the old London Bridge, and was the first rigged man-of-war afloat upriver of the bridge.[2][3] There was no immediate need for Beagle so she “lay in ordinary”, moored afloat but without masts or rigging. She was then adapted as a survey barque and took part in three survey expeditions.

The second voyage of HMS Beagle is notable for carrying the recently graduated naturalist Charles Darwin around the world. While the survey work was carried out, Darwin travelled and researched geology, natural history and ethnology onshore. He gained fame by publishing his diary journal, best known as The Voyage of the Beagle, and his findings played a pivotal role in the formation of his scientific theories on evolution and natural selection.
Third voyage (1837–1843)

In 1837 HMS Beagle set off on a survey of Australia.
In the six months after returning from the second voyage, some light repairs were made and Beagle was commissioned to survey large parts of the coast of Australia under the command of Commander John Clements Wickham, who had been a lieutenant on the second voyage, with assistant surveyor Lieutenant John Lort Stokes who had been a midshipman on the first voyage of Beagle, then mate and assistant surveyor on the second voyage (no relation to Pringle Stokes). They left Woolwich on 9 June 1837, towed by HM Steamer Boxer, and after reaching Plymouth spent the remainder of the month adjusting their instruments.[18] They set off from Plymouth Sound on the morning of 5 July 1837, and sailed south with stops for observations at Tenerife, Bahia and Cape Town.[30]

They reached the Swan River (modern Perth, Australia) on 15 November 1837.[31] Their survey started with the western coast between there and the Fitzroy River, Western Australia, then surveyed both shores of the Bass Strait at the southeast corner of the continent. To aid Beagle in her surveying operations in Bass Strait, the Colonial cutter Vansittart, of Van Diemen’s Land, was most liberally lent by His Excellency Sir John Franklin, and placed under the command of Mr Charles Codrington Forsyth, the senior mate, assisted by Mr Pasco, another of her mates. In May 1839, they sailed north to survey the shores of the Arafura Sea opposite Timor. When Wickham fell ill and resigned, the command was taken over in March 1841 by Lieutenant John Lort Stokes who continued the survey. The third voyage was completed in 1843.

Numerous places around the coast were named by Wickham, and subsequently by Stokes when he became captain, often honouring eminent people or the members of the crew. On 9 October 1839 Wickham named Port Darwin, which was first sighted by Stokes, in honour of their former shipmate Charles Darwin. They were reminded of him (and his “geologising”) by the discovery there of a new fine-grained sandstone.[32] A settlement there became the town of Palmerston in 1869, and was renamed Darwin in 1911 (not to be confused with the present day city of Palmerston near Darwin).[33]

During this survey, the Beagle Gulf was named after the ship.[34] 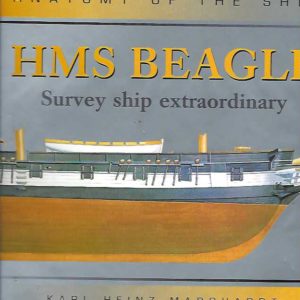