Home › Shop › MISCELLANEOUS › Dispute Between the Woman and the Powers of Darkness, A. 1802

Dispute Between the Woman and the Powers of Darkness, A. 1802

“In 1792, when she was 42, Joanna Southcott began writing down her prophecies, sealing them against the day they were to occur. In 1801 her publications began to appear, written in a combination of prose – sometimes plain, sometimes incantatory – and primitive verse. This pamphlet of 1802 is a sample of the flood of writings which she poured forth until her death in 1814. Joanna is visited by Satan, or Apollyon, or a Friend of Satan, and disputes with him; she triumphs; she recounts her dreams of a flying horseman, a balloon, fires in the sky. A farmer’s daughter and one-time servant, she is a descendant of Bunyan in the period of Blake. Unlike Blake she reaches a wide audience, speaking most directly to the poor and to women. Visionary, deluded, or mad, she was the object of veneration and focus of a large and devoted cult.” 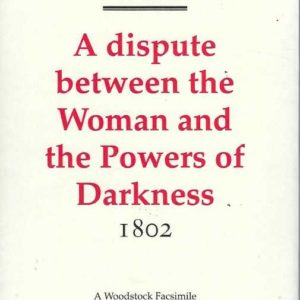 Dispute Between the Woman and the Powers of Darkness, A. 1802