Man of Intelligence, A: The Life of Captain Eric Nave, Australian Codebreaker Extraordinary

Captain Eric Nave OBE (1899–1993) was a Royal Australian Navy Paymaster Commander and cryptographer, before and during World War II. He served in the Navy from 1917 to 1949. As a midshipman in 1918 he needed to be proficient in a foreign language to gain promotion. He said he chose Japanese because extra pay of 6d per day was paid to those qualified in French or German, but those proficient in Japanese received 5/0d” (5 shillings)
Eric Nave, an Australian naval officer, was the first to unravel Japanese naval telegraphy and to break Imperial Japanese Navy codes. Nave’s success in penetrating Japan’s codes ensured that, in the South West Pacific area, Allied operational forces were able to strike the Japanese army and navy where and when it would cause most harm. Nave’s impressive Japanese language skills, and his almost-instinctive ability to spot the main features and weak points of intercepted messages, gained him widespread respect and admiration within the closed confines of Allied codebreaking before, during, and after World War Two. Between 1940 and 1942, almost single-handedly, he constructed Australia’s first signals intelligence bureau, making Australia as aware of Japanese intentions as the US and UK governments. At war’s end, he organized the compilation of the cribs on how Japanese codes had been broken. In 1946, he led the delegation which ensured Australia’s inclusion in the Allied signals intelligence arrangements, which continue to this day. This biography tells how he entered and carved his own special niche in the arcane world of codebreaking. It sets his achievements against the geopolitical shifts which led to war with Japan in 1941. It explores the dysfunctional nature of US signals intelligence and its effects on war in the Pacific, and charts the rise of Australia’s quantitative and qualitative contribution to Allied intelligence. The book also examines Eric’s work in post-war signals intelligence.
Machine derived contents note: 1 Early Days 13
2 First Breaks, 1925-27 40
3 Government Code and Cypher School 64
4 China Station, 1931-33 90
5 The Drift to War, 1933-37 110
6 Far East Combined Bureau, 1937-40 129
7 Australia Revisited, 1940-41 153
8 Pearl Harbor and the Arrival of the Americans, 1942 178
9 Central Bureau, Brisbane, 1942-45 207
10 After the War 231
11 In Retirement 258.
304 p., xvi p. of plates : ill., map, ports., facsim. ; 23 cm. #290422R
Nave, Eric, 1899-1993. | Australian Security Intelligence Organization — Biography. | Cryptographers — Australia — Biography. | Intelligence officers — Australia — Biography. | World War, 1939-1945 — Cryptography. | World War, 1939-1945 — Military intelligence — Pacific Area. | Military intelligence — Australia — History. 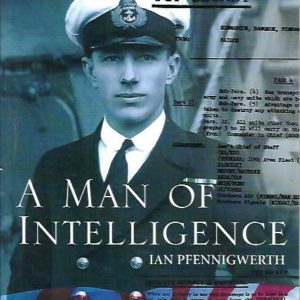 Man of Intelligence, A: The Life of Captain Eric Nave, Australian Codebreaker Extraordinary