Shores of Gallipoli, The: Naval Dimensions of the Anzac Campaign

The naval aspects of the ill-fated Gallipoli campaign have never received proper attention, although they affected the fundamental character and course of the expedition. Australia’s best-known naval historian, Dr Tom Frame outlines the role of the RAN, and why the Anzacs were put on the wrong beach. A major contribution. Gallipoli Peninsula (Turkey) First Edition

(From “Regimental Books”): “Dr Tom Frame recounts the Royal Australian Navy’s crucial contributions to the Gallipoli campaign; focusing on Submarine AE2 as the first Allied submarine to penetrate the Dardanelles, the work of the RAN Bridging Train, and the discovery of the sunken AE2 in 1998. His original research and personal knowledge make a compelling account and contribution to Gallipoli history.” 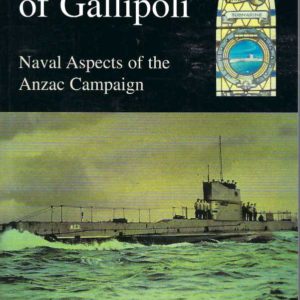 Shores of Gallipoli, The: Naval Dimensions of the Anzac Campaign