Showtime: The Cold Chisel Story : the First Decade and Beyond

Cold Chisel are an Australian pub rock band, which formed in Adelaide in 1973 by mainstay members Ian Moss on guitar and vocals, Steve Prestwich on drums and Don Walker on piano and keyboards. They were soon joined by Jimmy Barnes on lead vocals and, in 1975, Phil Small became their bass guitarist. The group disbanded in late 1983 but subsequently reformed several times. Musicologist Ian McFarlane wrote that they became “one of Australia’s best-loved groups” as well as “one of the best live bands”, fusing “a combination of rockabilly, hard rock and rough-house soul’n’blues that was defiantly Australian in outlook.”

At the ARIA Music Awards of 1993 they were inducted into the Hall of Fame. In 2001 Australasian Performing Right Association (APRA), listed their single, “Khe Sanh” (May 1978), at No. 8 of the all-time best Australian songs. Circus Animals was listed at No. 4 in the book, 100 Best Australian Albums (October 2010), while East appeared at No. 53. They won The Ted Albert Award for Outstanding Services to Australian Music at the APRA Music Awards of 2016. Cold Chisel’s popularity is largely restricted to Australia and New Zealand, with their songs and musicianship highlighting working class life. Their early bass guitarist (1973–75), Les Kaczmarek, died in December 2008; Steve Prestwich died of a brain tumour in January 2011. 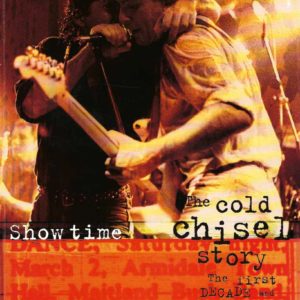 Showtime: The Cold Chisel Story : the First Decade and Beyond