The first edition issued February 1979, featured Rosemary Paul on the cover and Karen Pini as the centerfold. Note this is only an ACCEPTABLE USED copy with age wear to spine covers and possibly several marks. This is NOT at collector’s standard. (The image is generic.)

Playmate of the Month
Karen Pini

Australian Playboy featured similar content to the lead US edition 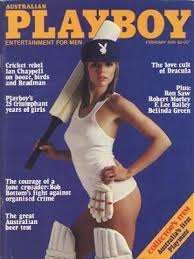