The 11th Hussars (Prince Albert’s Own) was a cavalry regiment of the British Army established in 1715. It saw service for three centuries including the First World War and Second World War but then amalgamated with the 10th Royal Hussars (Prince of Wales’ Own) to form the Royal Hussars in 1969.
With the exception of a short spell in Egypt in 1801, the regiment did not see active service again until it was sent to Portugal in April 1811, where it joined the Peninsular War campaign. In August, one of its squadrons was forced to take cover in an orchard at San Martín de Trevejo in Spain, an incident that may have been the derivation of its nickname, the Cherry Pickers.[9] It fought at Badajoz in April 1812 and the Battle of Salamanca in July 1812 before returning to Britain. During the campaign of 1815, it was part of Vandeleur’s 4th Cavalry Brigade, fighting at Quatre Bras and Waterloo.
In 1840, it was named 11th (Prince Albert’s Own) Hussars after Prince Albert, Queen Victoria’s consort, who became colonel of the regiment. Prince Albert’s interests included military tactics and equipment and he helped design a new uniform for the regiment named after him. Purely by coincidence, this included “cherry” or crimson coloured trousers, unique among British regiments and worn ever since in most orders, except battledress and fatigues.
The regiment served in the Crimean War, as part of the Light Brigade commanded by Cardigan, now a Major General and fought at the Battle of Alma in September 1854. It was also involved in the Charge of the Light Brigade in October 1854; due to miscommunication, Cardigan led the brigade against unbroken and more numerous Russian forces and while able to withdraw to its starting position, it suffered heavy losses as a result.
pp. 136 illusts #0921 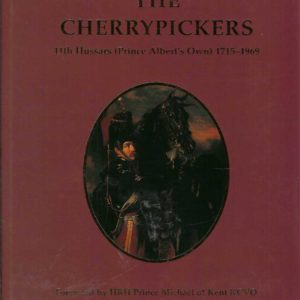