Home › Shop › MUSIC: Classical & Modern › GRIEG and DELIUS : A Chronicle of their Friendship in Letters

GRIEG and DELIUS : A Chronicle of their Friendship in Letters

When the Norwegian composer Christian Sinding introduced his young friend Frederick Delius (1862-1934) to Edvard Grieg (1843-1907) in Leipzig in 1887, it was to be a memorable occasion for each of them. Delius in particular was later to write of this first meeting with Grieg with great fondness and affection: I was very proud of having made his acquaintance, for since I was a little boy I had loved his music. I had as a child always been accustomed to Mozart and Beethoven and when I first heard Grieg it was as if a breath of mountain air had come to me. It was, for both men, the beginning of a long and deep personal friendship that, despite the inevitable vissitudes of time, survived until death was to claim each of them. Of all Grieg s English friends, Delius was by far the closest; and Grieg, in turn, played an important role in Delius s development both as a man and a composer. 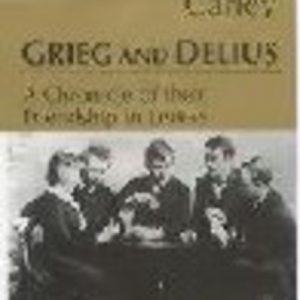 GRIEG and DELIUS : A Chronicle of their Friendship in Letters