Ex-Library, with a discard stamp on fly leafThe Grand Junction Railway (GJR) was an early railway company in the United Kingdom, which existed between 1833 and 1846 when it was merged into the London and North Western Railway. The line built by the company was the first trunk railway to be completed in England, and arguably the world’s first long-distance railway with steam traction.Today, the lines which made up the GJR form the central section of the West Coast Main Line. Authorised by Parliament in 1833 and designed by George Stephenson and Joseph Locke, the Grand Junction Railway opened for business on 4 July 1837, running for 82 miles (132 km) from Birmingham through Wolverhampton (via Perry Barr and Bescot), Stafford, Crewe, and Warrington, then via the existing Warrington and Newton Railway to join the Liverpool and Manchester Railway at a triangular junction at Newton Junction. The GJR established its chief engineering works at Crewe, moving there from Edge Hill, in Liverpool. Shortly after opening with a temporary Birmingham terminus at Vauxhall, services were routed to and from Curzon Street station, which it shared with the London and Birmingham Railway (LBR) whose platforms were adjacent, providing a link between Liverpool, Manchester and London. The route between Curzon Street station and Vauxhall primarily consisted of the Birmingham Viaduct. It consisted of 28 arches, each 31 feet (9.4 m) wide and 28 feet (8.5 m) tall and crossed the River Rea. In 1840 the GJR absorbed the Chester and Crewe Railway shortly before it opened. Seeing itself as part of a grand railway network, it encouraged the development of the North Union Railway which took the tracks onward to Preston, and it also invested in the Lancaster and Carlisle Railway and the Caledonian Railway. In 1845 the GJR merged with the Liverpool and Manchester Railway, and consolidated its position by buying the North Union Railway in association with the Manchester and Leeds Railway. In 1841 the company appointed Captain Mark Huish as the Secretary to the railway. Huish was ruthless in the development of the business and contributed significantly to the Company’s success. pp. 197 illusts E02 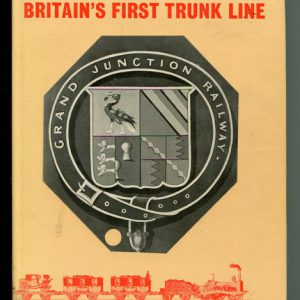