The building of a railway over the coastal mountains behind Cairns a century ago was one of the great engineering feats in Australia in colonial days, comparable to the better known Zig-Zag over the Blue Mountains. In fact, due to the extreme remoteness it was even more remarkable. Without this railway Cairns would not have become a city of importance, and its rich hinterland could not have been developed. This book tells of the work of the railway builders, the explorations in search of a route, and of the rivalry between Cairns, Port Douglas and Innisfail. Illustrated with 100 historical photographs. pp. 79 #0919R 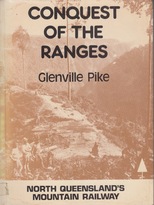