International Train Ferry Wagons in Colour for the Modeller and Historian

NEW. This exciting new volume concentrates on development of the train ferry wagon from the mid 1970s through to the present day, examining its impact on the ever changing railway scene. It begins with a brief history of the train ferries in World War 1, the development of the GER’s Harwich-Zeebrugge route, and later the SR’s Dover-Dunkerque service, finally examining the final sailing in 1995. The author carefully explains the method of operation at the ports, and broad division of traffic, including useful details of the freight services used to feed the wagons into the British rail network. The transfer of service to the Channel Tunnel and details of current services from Dollands Moor are also covered. Tanks and vans are given precedence within the text, as until recently they remained the dominant types over conflats. Wagons registered in France, Germany, and Italy as well as those international wagons registered in Britain are featured in detail, as they formed the bulk of the fleet. Also included is a rare selection of pictures of vehicles from the smaller railway administrations including Austria, Belgium, Czechoslovakia, Spain, Switzerland and Yugoslavia. Useful captions highlight important details such as wagon number, location and date, as well as special features, with details of load carried and customers served. First Edition pp. 96 illusts #0321 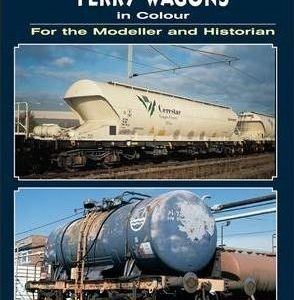 International Train Ferry Wagons in Colour for the Modeller and Historian