Home › Shop › SOLD! Currently OUT OF STOCK › Aborigines of Western Australia, The

Aborigines of Western Australia, The

Albert Frederick Calvert (1872-1946), author, traveller and mining engineer, was born on 20 July 1872 at Kentish Town, Middlesex, England, son of John Calvert, mining engineer, and his wife Grace, née Easley. He was brought up principally by his grandfather John Calvert (1814-1897), a widely travelled mineralogist who claimed extensive gold discoveries in Australia in the 1840s.Leaves from the Calvert Papers (1893) by Albert’s secretary G. Hill is a misleading account of his family history.

Calvert first visited Western Australia early in 1890 and in April undertook an expedition from Lake Gairdner in South Australia to the upper Murchison River. In April 1891 and December 1892, he practically repeated the trip on behalf of the General Exploration Co. of London and the British Australian Exploration Co. His most important discovery was the rare spinifex parakeet. Before the third journey, Calvert circumnavigated Australia collecting material for his book, The Discovery of Australia (London, 1893). Returning to London, he married Florence Holcombe at Kentish Town on 28 March 1894. 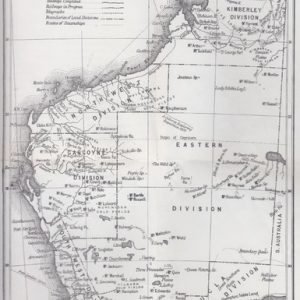 Aborigines of Western Australia, The