Home › Shop › SOLD! Currently OUT OF STOCK › And to think that I saw it on Mulberry street

And to think that I saw it on Mulberry street

Seventy-five years ago, before Theodor Geisel rocked the culinary world with green eggs and ham or put a red-and-white striped top hat on a talking cat, Geisel (whom you probably know better as Dr. Seuss) was stuck on a boat, returning from a trip to Europe.

For eight days, he listened to the ship’s engine chug away. The sound got stuck in his head, and he started writing to the rhythm. Eventually, those rhythmic lines in his head turned into his first children’s book: It was called And to Think That I Saw It on Mulberry Street.

The story, which turns 75 this year, is about a boy named Marco who wants to tell his father an interesting story about what he saw that day on his walk home from school — but the only thing Marco has seen (other than his own feet) is a boring old horse and wagon on Mulberry Street. 180315 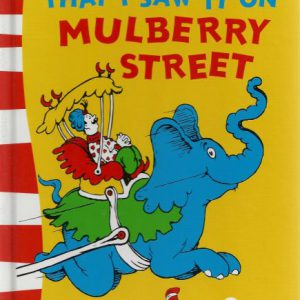 And to think that I saw it on Mulberry street