Anatomy of the Ship: The Armed Transport Bounty (Revised edition.)

An account of the purchase by the Navy of the merchant vessel Bethia and her subsequent conversion into a naval transport The Bounty, as she was renamed, was made eternally famous by the mutiny against Captain Bligh in 1789.
312 black & white drawings and photographs. (Name on fep and very light soiling to front blank, light corner bumping, bookshop receipt to epd.) #090422

HMS Bounty, also known as HM Armed Vessel Bounty, was a small merchant vessel that the Royal Navy purchased in 1787 for a botanical mission. The ship was sent to the South Pacific Ocean under the command of William Bligh to acquire breadfruit plants and transport them to the West Indies. That mission was never completed owing to a 1789 mutiny led by acting lieutenant Fletcher Christian, an incident now popularly known as the mutiny on the Bounty.[1] The mutineers later burned Bounty while she was moored at Pitcairn Island. An American adventurer helped land several remains of Bounty in 1957.
Bounty was originally a collier, Bethia, reputedly built in 1784 at Blaydes Yard in Hull, Yorkshire in England. The Royal Navy purchased her for £1,950 on 23 May 1787 (equivalent to £222,000 in 2019), refit, and renamed her Bounty.[2] The ship was relatively small at 215 tons, but had three masts and was full-rigged. After conversion for the breadfruit expedition, she was equipped with four 4-pounder (1.8 kg)[5] cannon and ten swivel guns.
The Royal Navy had purchased Bethia for a single mission in support of an experiment: the acquisition of breadfruit plants from Tahiti, and the transportation of those plants to the West Indies in the hope that they would grow well there and become a cheap source of food for slaves. Sir Joseph Banks had proposed the experiment and had recommended Lieutenant William Bligh R.N. as commander. Bligh in turn was promoted through a prize offered by the Royal Society of Arts.

In June 1787, Bounty was refitted at Deptford. The great cabin was converted to house the potted breadfruit plants, and gratings were fitted to the upper deck. William Bligh was appointed Commanding Lieutenant on 16 August 1787 at the age of 33, after a career that included a tour as sailing master of James Cook’s Resolution during Cook’s third and final voyage (1776–1780). The ship’s complement was 46 men: a single commissioned officer (Bligh), 43 other Royal Navy personnel, and two civilian gardeners.
On 23 December 1787, Bounty sailed from Spithead for Tahiti. For a full month, the crew attempted to take the ship west, around South America’s Cape Horn, but adverse weather prevented this. Bligh then proceeded east, rounding the southern tip of Africa (Cape Agulhas) and crossing the width of the Indian Ocean. During the outward voyage, Bligh demoted Sailing Master John Fryer, replacing him with Fletcher Christian. This act seriously damaged the relationship between Bligh and Fryer, and Fryer later claimed that Bligh’s act was entirely personal.

Bligh is commonly portrayed as the epitome of abusive sailing captains, but this portrayal has recently come into dispute. Caroline Alexander points out in her 2003 book The Bounty that Bligh was relatively lenient compared with other British naval officers.[6] Bligh enjoyed the patronage of Sir Joseph Banks, a wealthy botanist and influential figure in Britain at the time. That, together with his experience sailing with Cook, familiarity with navigation in the area, and local customs were probably important factors in his appointment.[7]

Bounty reached Tahiti, then called “Otaheite”, on 26 October 1788, after ten months at sea. The crew spent five months there collecting and preparing 1,015 breadfruit plants to be transported. Bligh allowed the crew to live ashore and care for the potted breadfruit plants, and they became socialised to the customs and culture of the Tahitians. Many of the seamen and some of the “young gentlemen” had themselves tattooed in native fashion. Master’s Mate and Acting Lieutenant Fletcher Christian married Maimiti, a Tahitian woman. Other warrant officers and seamen were also said to have formed “connections” with native women.
After five months in Tahiti, Bounty set sail with her breadfruit cargo on 4 April 1789. Some 1,300 miles (2,100 km) west of Tahiti, near Tonga, mutiny broke out on 28 April 1789. Despite strong words and threats heard on both sides, the ship was taken bloodlessly and apparently without struggle by any of the loyalists except Bligh himself. Of the 42 men on board aside from Bligh and Christian, 22 joined Christian in mutiny, two were passive, and 18 remained loyal to Bligh.

The mutineers ordered Bligh, two midshipmen, the surgeon’s mate (Ledward), and the ship’s clerk into the ship’s boat. Several more men voluntarily joined Bligh rather than remain aboard. Bligh and his men sailed the open boat 30 nautical miles (56 km) to Tofua in search of supplies, but were forced to flee after attacks by hostile natives resulted in the death of one of the men.

Bligh then undertook an arduous journey to the Dutch settlement of Coupang, located over 3,500 nautical miles (6,500 km) from Tofua. He safely landed there 47 days later, having lost no men during the voyage except the one killed on Tofua.

The mutineers sailed for the island of Tubuai, where they tried to settle. After three months of bloody conflict with the natives, however, they returned to Tahiti. Sixteen of the mutineers – including the four loyalists who had been unable to accompany Bligh – remained there, taking their chances that the Royal Navy would not find them and bring them to justice.

HMS Pandora was sent out by the Admiralty in November 1790 in pursuit of Bounty, to capture the mutineers and bring them back to England to face a court martial. She arrived in March 1791 and captured fourteen men within two weeks; they were locked away in a makeshift wooden prison on Pandora’s quarterdeck. The men called their cell “Pandora’s box”. They remained in their prison until 29 August 1791 when Pandora was wrecked on the Great Barrier Reef with the loss of 35 lives, including four mutineers (Stewart, Sumner, Skinner, and Hildebrand).

Immediately after setting the sixteen men ashore in Tahiti in September 1789, Fletcher Christian, eight other crewmen, six Tahitian men, and 11 women, one with a baby, set sail in Bounty hoping to elude the Royal Navy. According to a journal kept by one of Christian’s followers, the Tahitians were actually kidnapped when Christian set sail without warning them, the purpose of this being to acquire the women. The mutineers passed through the Fiji and Cook Islands, but feared that they would be found there.

Continuing their quest for a safe haven, on 15 January 1790 they rediscovered Pitcairn Island, which had been misplaced on the Royal Navy’s charts. After the decision was made to settle on Pitcairn, livestock and other provisions were removed from Bounty. To prevent the ship’s detection, and anyone’s possible escape, the ship was burned on 23 January 1790 in what is now called Bounty Bay.

Bounty Bay, where Bounty was grounded and set alight
The mutineers remained undetected on Pitcairn until February 1808, when sole remaining mutineer John Adams and the surviving Tahitian women and their children were discovered by the Boston sealer Topaz, commanded by Captain Mayhew Folger of Nantucket, Massachusetts.[8] Adams gave to Folger the Bounty’s azimuth compass and marine chronometer.

Seventeen years later, in 1825, HMS Blossom, on a voyage of exploration under Captain Frederick William Beechey, arrived on Christmas Day off Pitcairn and spent 19 days there. Beechey later recorded this in his 1831 published account of the voyage, as did one of his crew, John Bechervaise, in his 1839 Thirty-Six Years of a Seafaring Life by an Old Quarter Master. Beechey wrote a detailed account of the mutiny as recounted to him by the last survivor, Adams. Bechervaise, who described the life of the islanders, says he found the remains of Bounty and took some pieces of wood from it which were turned into souvenirs such as snuff boxes. 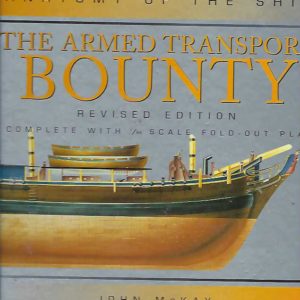 Anatomy of the Ship: The Armed Transport Bounty (Revised edition.)