View cart “Art Was Their Weapon: The History of the Perth Workers’ Art Guild” has been added to your cart.

Mortal Engines is a young-adult science fantasy novel by Philip Reeve, published by Scholastic UK in 2001. The book focuses on a futuristic, steampunk version of London, now a giant machine striving to survive on a world running out of resources.

Mortal Engines is the first book of a series, Mortal Engines Quartet, published from 2001 to 2006.[1][2] It has been adapted as a 2018 feature film by Peter Jackson and Hollywood, though its movie universe is different from that of the book.[3]

The book won a Nestlé Smarties Book Prize and the 2003 Blue Peter Book Award. It was shortlisted for the 2002 Whitbread Award, the 2004 ALA‘s Notable Books for Children award and the 2020 Blue Peter Awards 20th anniversary prize.[4][5][6]

The book is set in a post-apocalyptic world, ravaged by the “Sixty Minute War”, a conflict that was so violent it caused massive geological upheaval. To escape the earthquakes, volcanic eruptions, and other instabilities, a Nomad leader called Nikola Quercus (known as god Nicholas Quirke by the time of the book) installed huge engines and wheels on London, and enabled it to dismantle (or eat) other cities for resources. The technology rapidly spread, and evolved into what is known as “Municipal Darwinism”. Although the planet has since become stable, Municipal Darwinism has spread to most of the world except for some parts of Asia and Africa. Because scientific progress has almost completely halted and much technological and scientific knowledge was lost during the war, “Old Tech” is highly prized and recovered by scavengers and archaeologists. Europe, some of Asia, North Africa, Antarctica, and the Arctic are dominated by Traction Cities, whereas North America – often identified as “the dead continent” due to the extensive destruction it suffered during the war – and the rest of the world is the stronghold of the Anti-Traction League, which seeks to keep cities from moving and thus stop the intense consumption of the planet’s remaining resources.

London is the principal Traction City in the novel, which has returned to a Victorian-era society. London’s society is divided into four major and a number of minor Guilds. The Engineers are responsible for maintaining the machines necessary for the survival of London, many of which are found by the Guild of Historians. The Historians are in charge of collecting and preserving highly prized, often dangerous artifacts. The Navigators are responsible for steering and plotting the course of London. The Merchants are in charge of running London’s economy. London is officially ruled by an elected Mayor. The Lord Mayor is Magnus Crome, who is also the head of the Guild of Engineers. Like most Traction Cities, London is built on a series of tiers. This encourages the system of social classes, with the wealthier nobles at the top of the city and the lower classes further down, closer to the noise and pollution of the city’s massive engines. Atop the whole of London sits St Paul’s Cathedral: the only building known to have survived the Sixty Minute War. 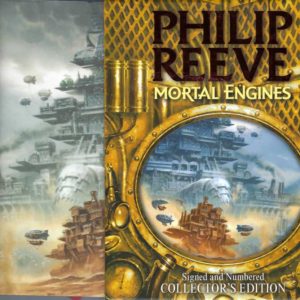