The Secret Teachings of All Ages: An Encyclopedic Outline of Masonic, Hermetic, Qabbalistic and Rosicrucian Symbolical Philosophy- Reduced Size Hardbound in Color

“NUMEROUS volumes have been written as commentaries upon the secret systems of philosophy existing in the ancient world, but the ageless truths of life, like many of the earth’s greatest thinkers, have usually been clothed in shabby garments. The present work is an attempt to supply a tome worthy of those seers and sages whose thoughts are the substance of its pages. To bring about this coalescence of Beauty and Truth has proved most costly, but I believe that the result will produce an effect upon the mind of the reader which will more than justify the expenditure.”

Manly Palmer Hall (March 18, 1901 – August 29, 1990) was a Canadian-born mystic, eclectic philosopher and founder of the Philosophical Research Society, a modern equivalent of the school of Pythagoras.[1] He was the 20th century’s most prolific writer on mysticism, magic, and ancient philosophies. He authored more than 200 books and gave more than 8000 lectures, most of them weekly at the headquarters of the Philosophical Research Institute.

Hall is best known for his 1928 work The Secret Teachings of All Ages. Hall published his magnum opus, an introduction to ancient symbols and secret traditions, at the age of 27, to immediate acclaim. It is the most important book of the early twentieth-century American occult revival and remains influential to this day.[2]

Hall’s career as a mystic sage began in 1919, when he came to California to be reunited with his mother. [4] He came under the influence of self-styled followers of Rosicrucianism in Oceanside, California. He lived at the Rosicrucian Fellowship founded by Max Heindel but grew suspicious of the order’s claims to ancient wisdom and soon moved to Los Angeles. There he fell in with metaphysical seekers and discussion groups. [5] One day young Manly Hall was attracted by a sign advertising phrenology, the discipline that reads human psychology through the shape and contours of the skull. The proprietor of the shop, Sydney J. Brownson, quickly became Halls’ guru and explained magnetism, reincarnation, the aura, the wisdom of the ancients, the mysteries of India and the East and the secret teachings of the church to Hall, who proved to be an excellent student with a photographic memory and a talent for speaking. One year later Brownson invited Hall to speak to a select audience who met weekly in a room above a bank and he was a success.[6]

Part showman, part shaman, Hall wore a dark tailored suit and sat mid-stage, his hands resting palms down on the arms of a baronial chair that was bathed in light. He spoke for 1 ½ hours – not a minute longer. Whether his subject was Egyptian initiation ceremonies or mythic water sprites, he concluded abruptly with the same sign-off: “Well, that’s about all for today folks.“[7]

Manly Hall was a bit fanatical about anything relating to Helena Petrovna Blavatsky [H.P.B.] He was tremendously earnest about his particular view of Theosophy.[12]He said that the original work of H.P.B. stands more or less unique even within the field of related literature, that her own particular insight makes her works unique, remarkable and valuable. He further said that many of the remarks which she made during her time, which were highly controversial, are now generally accepted and that many of the findings which she reported and which amazed her contemporaries, now belong to our common knowledge.[13]

When Boris de Zirkoff assumed the role as editor of Blavatsky’s complete works after World War II, he worked with Hall to publish the fifth volume at the Philosophical Research Society in 1950. Subsequent volumes VI-XV were published through the Theosophical Publishing House in Adyar, India and Wheaton, Illinois, and the PRS helped with distribution. Boris de Zirkoff conducted a long correspondence with Manly Hall.[14]

Hall’s world travels in the early 1920s gave him some degree of proximity to the monuments and philosophies of antiquity. But the materials that finally made it possible for him to complete his book of wisdom were those he discovered in the great Western libraries just opening to widespread public use. Through the influence of benefactors, Hall gained access to some of the rarest manuscripts at the British Museum and while living in New York in the mid-1920s, he found material in the vast beaux arts reading room of the New York Public Library. He amassed a bibliography of nearly one thousand entries.

By mid-1928, having presold subscriptions for almost a thousand copies and printing 1,200 more, he published what would become known as the “Big Book” and it has never gone out of print since. [15] The Secret Teachings of All Ages, funded by a bevy of wealthy supporters was published to immediate acclaim. Hall published other books widely considered classics of occult literature, but the Secret Teachings of All Ages stands head and shoulders above the rest. It is the most important book of the early twentieth-century American occult revival, it remains influential, and many of the teachings and ideas it presented to the public remain in circulation. [16][17]

The book is magnificently illustrated with 54 original full-color plates of ancient and medieval emblems and figures by noted illustrator J. Augustus Knapp and 200 black-white illustrations borrowed from rare occult works. The instant success of the book catapulted Hall into the national spotlight. [18]It was the only serious, comprehensive codex of its era that took the world of myth and symbol on its own terms. Hall peered into sources that many historians refused to consider – from Masonic and Rosicrucian tracts to alchemical and astrological works – and recent scholarship has justified some of his historic conclusions. While The Secret Teachings of All Ages has always been ignored within academia, it influenced some who chose more traditional scholarly paths than Hall’s. He clarified ancient ideas that could otherwise seem beyond reach, writing not as a distant judge but as a lover of the rites and mysteries embodied in the old ways.[19] 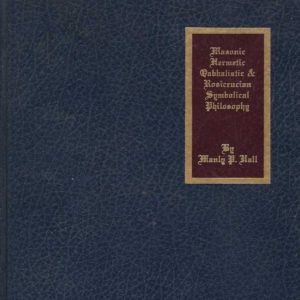 The Secret Teachings of All Ages: An Encyclopedic Outline of Masonic, Hermetic, Qabbalistic and Rosicrucian Symbolical Philosophy- Reduced Size Hardbound in Color