Asterix and the Actress

The latest Asterix book sees Asterix and Obelix celebrating their joint birthday party back in the Gaulish village – and some surprise guests have been invited! Meanwhile, Julius Caesar has to deal with his old enemy Pompey, who is looking for supporters among the legions stationed in Gaul.

And just what part do two old friends play in the story – Tremensdelirius, from Asterix and Caesar’s Gift, and the lovely Panacea, first encountered in Asterix and the Legionary? After many exciting adventures, all is revealed.

On returning to the village, our heroes meet an actress who plays tragic roles and looks just like Panacea. Responding to readers’ huge appreciation of Panacea, who has been played in the meantime by Laetitia Casta in a film, the author now gives us two Panaceas in the same album.

The spirit of the series is fully respected, and the legend lives on. The album is even more successful than the previous one. With tailor-made public relations and appropriate marketing, Asterix remains a unique hero.

Asterix and the Actress is the album in which we meet Asterix and Obelix’s parents for the first time. Well, not so sure: we’ve already come across them in a short 4-page story about the day when Asterix and Obelix were born. This was brought out by Albert Uderzo to celebrate the 35th birthday of the heroes he had created with his friend René Goscinny.

Industry Reviews
A cartoon drawn with such supreme artistry, and a text layered with such glorious wordplay, satire and historical and political allusion that no reader should ever feel like they’ve outgrown it.–TIME OUT
The Asterix books represent the very summit of our achievement as a literary race. In Asterix one finds all of human life. The fact that the books were written originally in French is no matter. I have read them all in many languages and, like all great literature, they are best in English. Anthea Bell and Derek Hockridge, Asterix’s translators since the very beginning, have made great books into eternal flames.–THE TIMES #021 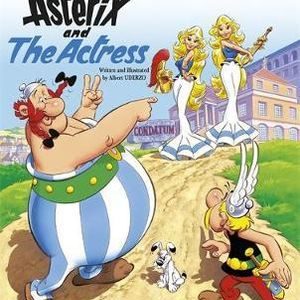 Asterix and the Actress