King Ottokar’s Sceptre (French: Le Sceptre d’Ottokar) is the eighth volume of The Adventures of Tintin, the comics series by Belgian cartoonist Hergé. Commissioned by the conservative Belgian newspaper Le Vingtième Siècle for its children’s supplement Le Petit Vingtième, it was serialised weekly from August 1938 to August 1939. Hergé intended the story as a satirical criticism of the expansionist policies of Nazi Germany, in particular the annexation of Austria in March 1938 (the Anschluss). The story tells of young Belgian reporter Tintin and his dog Snowy, who travel to the fictional Balkan nation of Syldavia, where they combat a plot to overthrow the monarchy of King Muskar XII.

Having discovered a lost briefcase in a Belgian park, Tintin returns it to its owner, the sigillographer Professor Hector Alembick, who informs the reporter of his plans to travel to the Balkan nation of Syldavia. Tintin discovers agents spying on the professor and follows those responsible to a nearby Syldavian restaurant.[1] An unknown man agrees to meet with Tintin but is found unconscious and appears to have amnesia. Shortly after, the reporter receives a threatening note and is then the target of a bomb attack; Tintin survives the latter when police detectives Thomson and Thompson intercept the bomb. Suspecting that these events are linked to Syldavia, Tintin decides to accompany Professor Alembick on his forthcoming visit to the country.[2] On the plane journey there, Tintin notices Alembick acting out of character, and suspects that an imposter has replaced him. Reading a brochure on Syldavian history, Tintin theorises that the imposter is part of a plot to steal the sceptre of the Medieval King Ottokar IV from the current King Muskar XII before St. Vladimir’s Day, thus forcing him to abdicate.[3]

Forcibly ejected from the plane by the pilot, Tintin survives and informs local police of his fears regarding the plot. However, the police captain is part of the conspiracy, and he organises an ambush in the woods where Tintin will be eliminated. Tintin evades death, and heads to the capital city of Klow in a car carrying the opera singer Bianca Castafiore.[4] Leaving the car to evade Castafiore’s singing, Tintin is arrested again and survives another assassination attempt before heading to Klow on foot. Arriving in the city, he meets the King’s aide-de-camp, Colonel Boris Jorgen, and warns him of the plot. However, Jorgen is also a conspirator and organises a further unsuccessful assassination attempt aimed at Tintin.[5]

Tintin succeeds in personally warning the King about the plot. Concerned, Tintin and Muskar rush to Kropow Castle, where the sceptre is kept, to find that the imposter pretending to be Alembick has succeeded in smuggling it out of the building to his accomplices.[6] With the aid of Thomson and Thompson, who have recently arrived in Syldavia, Tintin pursues the thieves, first by car and then by foot. He is able to prevent the sceptre being carried over the border into neighbouring Borduria, discovering a letter on one of the conspirators. It reveals that the plot has been orchestrated by Müsstler, a political agitator who runs the Syldavian Iron Guard, or Zyldav Zentral Revolutzionär Komitzät (ZZRK), and who intends to stir up unrest in Syldavia, thereby allowing Borduria to invade and annex the country.[7] Entering Borduria, Tintin commandeers a fighter plane and heads to Klow, but the Syldavian military shoot him down. Parachuting, he continues to Klow by foot, returning the sceptre to the King on St. Vladimir’s Day and securing the monarchy. In thanks, the king makes Tintin a Knight of the Order of the Golden Pelican; the first foreigner to receive the honour. Tintin later learns that the imposter was Alembick’s twin brother while police arrest Müsstler and rescue Professor Alembick.[8]

King Ottokar’s Sceptre was a commercial success and was published in book form by Casterman shortly after its conclusion. Hergé continued The Adventures of Tintin with Land of Black Gold until Le Vingtième Siècle‘s forced closure in 1940, while the series itself became a defining part of the Franco-Belgian comics tradition. In 1947, Hergé coloured and redrew King Ottokar’s Sceptre in his distinctive ligne-claire style with the aid of Edgar P. Jacobs for Casterman‘s republication. The story introduces the recurring character Bianca Castafiore, and introduced the fictional countries of Syldavia and Borduria, both of which reappear in later stories. The first volume of the series to be translated into English, King Ottokar’s Sceptre was adapted for both the 1956 Belvision Studios animation Hergé’s Adventures of Tintin and for the 1991 Ellipse/Nelvana animated series The Adventures of Tintin.

Originally published 1939, Tintin fights against a fascist coup d’etat in Syldavia. We stock the full range of Tintins. ‘Hergé’ was born Georges Remi on 22 May, 1907 in Etterbeek, a suburb of Brussels, in Belgium. After leaving school, he worked for the daily newspaper, Le XXe Siècle (The 20th Century). He was responsibe the for the section of the newspaper designed for children. Tintin, the main character in his works, was introduced on January 10, 1929 in a story entitled ‘Tintin in the Land of the Soviets.’ Each story ran as a comic strip in the newspaper and then was published as a book. Some of these books were adapted for the small screen including The Crab With The Golden Claws, Star of Mystery, Red Rakham’s Treasure, Black Island, Objective Moon and The Calculus Affair. French TV produced longer versions of twenty of the books in 1992, which have been broadcast in over fifty countries. On 3 March, 1983, he died in Brussels. At the time of his death, he was working on Tintin and the Alpha-Art, which was published in an unfinished form. 191014/0518/1219/0420/0321/0621 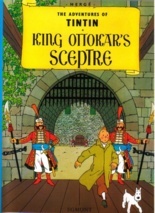