Asterix and the Class Act

A superb collection of 14 short stories. Go back to the beginning when Asterix and Obelix were born—in the middle of a village fish fight. Find out how Dogmatix helps the village cockerel win a duel, and becomes a Roman mascot. Follow the bidding for the first Gaulish Olympics. Asterix’s legion of fans will see him as they never have before.

Industry Reviews
If Orion Books had just found and published one of the “lost” Shakespeare plays…I would not have been more excited than when I learnt of the publication of 14 previously untranslated Asterix stories in a new book called ASTERIX AND THE CLASS ACT….Anthea Bell and Derek Hockridge, Asterix’s translators since the very beginning, have made great books into eternal flames – THE TIMES – Giles Coren

One of the most appealing features of the Asterix books is their ingenious, twisting plotlines, filled with scheming villains and hapless fools….Asterix and the Class Act might appeal more to Asterix diehards than to general fans; but it is an entertaining addition to the canon – TIMES LITERARY SUPPLEMENT – Toby Lichtig
Asterix is a true hero of global proportions – COLCHESTER EVENING GAZETTE
Here’s a chance to dip into some new fun with the roast boar-loving French action men – NUNEATON EVE TELEGRAPH – Marion McMullen
LIke all the best children’s books, Asterix works on several levels. More than a footnote, this addition to the series is worthy of its lineage – EVERYTHING FRANCE
#0521 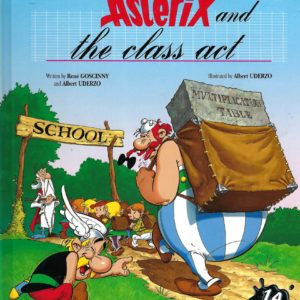 Asterix and the Class Act