BLACK ISLAND, The : The Adventures of Tintin (L’Ile Noire)

It is in current events that Hergé finds his most interesting themes. At the time, the press was giving extensive accounts on a ring of currency counterfeiters, and it will give us The Black Island (1938). Tintin rushes to Scotland where he will confront a gorilla haunting a manor on a rocky island. This is a mysterious airplane which sets Tintin, for the first time, on the trail of Doctor Müller. The latter runs a strange kind of mental asylum: he who enters is not necessarily deranged. As he pursues Müller, Tintin will end up on the Black Island where he will discover an even stranger activity… While walking in the Belgian countryside Tintin sees an aircraft making an emergency landing. He goes to help and notices that it does not have a registration number on it. As he approaches the plane he is shot by the pilot. Tintin recovers at a hospital where police detectives Thompson and Thompson inform him that a similar plane has crashed in a field in Sussex, England. Tintin decides to investigate for himself.Tintin takes a train from Brussels to the coast in order to board the ferry from Ostend to Dover… (The Mystery of the Grey Plane).The book is known for Snowy’s repeated misbehavior and heroism. This is the only book in which Tintin physically disciplines Snowy. Snowy plays a major role in the plot also, both good and bad. #0816R/1219/0420 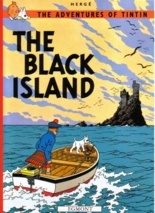 BLACK ISLAND, The : The Adventures of Tintin (L’Ile Noire)