THE RETURN OF ASTERIX, THE WORLD’S FIRST SUPERHERO: The relaunch of the re-inked, re-coloured and re-designed Asterix series, now published in the correct order for the first time.

Gaul was divided into three parts. No, four parts – for one small village of indomitable Gauls still held out against the Roman invaders.

It’s off to the wars for Asterix and Obelix. They’ve enlisted as legionaries in order to rescue Tragicomix, whom the Romans forcibly conscripted. The two find Tragicomix and succeed in causing the biggest commotion ever on a battlefield.

It is almost impossible to single out one album from this remarkable comic book series, but Legionary comes closest to perfection. A masterclass in comedy to read again and again — Robin Etherington * The Big Issue * #0521 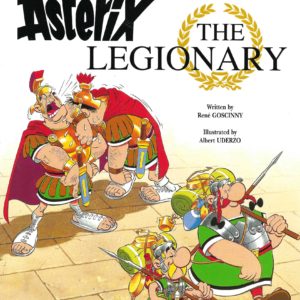