Flight 714 (to Sydney) stops in Jakarta. A sudden encounter with an old acquaintance (Scoot) leads Tintin and his friends to accept the invitation from the famous billionaire Laszlo Carreidas (‘The Man Who Never Laughs’)… Hergé’ was born Georges Remi on 22 May, 1907 in Etterbeek, a suburb of Brussels, in Belgium. After leaving school, he worked for the daily newspaper, Le XXe Siècle (The 20th Century). He was responsible the for the section of the newspaper designed for children. Tintin, the main character in his works, was introduced on January 10, 1929 in a story entitled ‘Tintin in the Land of the Soviets.’ Each story ran as a comic strip in the newspaper and then was published as a book. Some of these books were adapted for the small screen including The Crab With The Golden Claws, Star of Mystery, Red Rakham’s Treasure, Black Island, Objective Moon and The Calculus Affair. French TV produced longer versions of twenty of the books in 1992, which have been broadcast in over fifty countries. On 3 March, 1983, he died in Brussels. At the time of his death, he was working on Tintin and the Alpha-Art, which was published in an unfinished form. #010115/0218+1/1118/0119/1219/0420/0621

Flight 714 to Sydney (French: Vol 714 pour Sydney; originally published in English as Flight 714) is the twenty-second volume of The Adventures of Tintin, the comics series by Belgian cartoonist Hergé. It was serialised weekly from September 1966 to November 1967 in Tintin magazine. The title refers to a flight that Tintin and his friends fail to catch, as they become embroiled in their arch-nemesis Rastapopoulos‘ plot to kidnap an eccentric millionaire from a supersonic business jet on a Sondonesian island.

Hergé started work on Flight 714 to Sydney four years after the completion of his previous Adventure, The Castafiore Emerald. At this point in his life, he was increasingly uninterested in the series, and used the story to explore the paranormal phenomena that deeply fascinated him. After its serialisation in Tintin magazine, the story was collected for publication in book form by Casterman in 1968. Although the artwork has been noted for its high level of detail, critical reception of Flight 714 to Sydney has been mixed to negative, with its narrative being criticised by commentators for the farcical portrayal of its antagonists and for leaving its central mystery unresolved. Hergé continued The Adventures of Tintin with Tintin and the Picaros, while the series itself became a defining part of the Franco-Belgian comics tradition. The story was adapted for the 1991 animated Ellipse/Nelvana series The Adventures of Tintin.

During a refueling stop in Kemajoran Airport, Jakarta en route to an international space exploration conference in Sydney, Tintin, his dog Snowy, and their friends Captain Haddock and Professor Calculus chance upon their old acquaintance Skut (introduced in The Red Sea Sharks), who is now the personal pilot for aircraft industrialist and eccentric millionaire Laszlo Carreidas. Tintin and his friends join Carreidas on his prototype private jet, the Carreidas 160, crewed by Skut, co-pilot Hans Boehm, navigator Paolo Colombani, and steward Gino. Carreidas’ secretary Spalding, Boehm, and Colombani hijack the plane and bring it to the (fictional) deserted volcanic island of Pulau-pulau Bompa, situated in the Celebes Sea, where the aircraft makes a rough landing on a makeshift runway. While disembarking from the plane, Snowy bolts from Tintin’s arms and runs off into the jungle under gunfire. The mastermind of the plot then reveals himself as Rastapopoulos, intent on seizing Carreidas’ fortune. Captain Haddock’s corrupt ex-shipmate, Allan, is present as Rastapopoulos’s henchman, and Sondonesian nationalists have been hired as mercenaries.[1]

Tintin, Haddock, Calculus, Skut and Gino are bound and held in a Japanese World War II-era bunker, while Rastapopoulos takes Carreidas to another bunker where his accomplice, Dr. Krollspell, injects him with a truth serum to reveal Carreidas’s Swiss bank account number. Under the serum’s influence, Carreidas becomes eager to confide his life of greed, perfidy, and theft, revealing every detail thereof except the account number. Furious, Rastapopoulos strikes at Krollspell, who is still holding the truth serum syringe, and is accidentally injected, whereupon he too boasts of past crimes until he and Carreidas quarrel over which of them is the most evil. In the process, Rastapopoulos reveals that nearly all of the men he recruited, including Spalding, the aircraft pilots, the Sondonesians and Krollspell, are marked to be eliminated after he gets the account number.[2]

Snowy helps Tintin and his friends escape, and they find the bunker where Carreidas is held prisoner. Tintin and Haddock bind and gag Rastapopoulos, Krollspell and Carreidas, and escort them to lower ground, intending to use Rastapopoulos as a hostage. The serum’s effect wears off, and Rastapopoulos escapes; Krollspell, eager to stay alive, continues to accompany Tintin and Haddock. After a run-in with Allan and the Sondonesians, Tintin, led by a telepathic voice, guides the other protagonists to a cave, where they discover a temple hidden inside the island’s volcano, guarded by an ancient statue resembling a modern astronaut. Inside the structure, Tintin and his friends reunite with Calculus and meet the scientist Mik Kanrokitoff, whose guiding voice they have followed via a telepathic transmitter obtained from an extraterrestrial race that was formerly worshipped on the island as gods and are now working with Kanrokitoff to communicate with Earth’s scientists. An earthquake and explosion set off by Rastapopoulos and his men triggers a volcanic eruption; Tintin and his party reach relative safety in the volcano’s crater. Rastapopoulos and his henchmen flee the eruption outside the volcano and launch a rubber dinghy from Carreidas’ plane.[3]

Kanrokitoff puts Tintin and his compatriots under hypnosis and summons a flying saucer piloted by the extraterrestrials, which they board to escape the eruption. Kanrokitoff spots the rubber dinghy and exchanges Tintin and his companions (except Krollspell, who is returned to his clinic) for Allan, Spalding, Rastapopoulos, and the treacherous pilots, who are whisked away in the saucer to an unknown fate. Tintin, Haddock, Calculus, Skut, Gino and Carreidas awaken from hypnosis and cannot remember what happened to them; Calculus retains a crafted rod of alloyed cobalt, iron, and nickel, which he had found in the caves. The cobalt is of a state that does not occur on Earth, and is the only evidence of an encounter with its makers. Only Snowy, who cannot speak, remembers the hijacking and alien abduction. After being rescued by a scouting plane and interviewed about what they can recall of their ordeal, Tintin, his companions, and Carreidas catch Qantas Flight 714 to Sydney.[4] 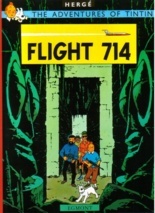