View cart “PRISONERS OF THE JAPANESE: POWs of World War II in the Pacific.” has been added to your cart.

Woman’s War, A : The Exceptional Life of Wilma Oram Young, AM

Wilma Elizabeth Forster (n?äÔÇ£e Oram) Young AM (17 August 1916 – 28 May 2001), commonly known as Wilma Oram, was an Australian Armynurse during the Second World War. She was evacuated from Singapore in February 1942 and was aboard the Vyner Brooke when the ship was sunk in Bangka Strait by Japanese aircraft. After surviving on the water for many hours she came ashore at Bangka Island and became a prisoner of war (POW) until 1945. Following the war she married Alan Livingstone Young (also a prisoner of war), settled on a dairy farm at Cardinia in Victoria and had 4 children. Aside from her work on the farm she was an active member of the RSL, serving as the treasurer and even as president of the Pakenham RSL. She worked tirelessly towards many causes including greater recognition for Vietnam War veterans and to raise money for the Australian Service Nurses National Memorial, unveiled in Canberra on 2 October 1999. pp.328 #181015/0419 First EditionYoung, Wilma. | Nurses — Australia — Biography. | Prisoners of war — Australia — Biography. | Prisoners of war — Japan — Biography. | World War, 1939-1945 — Prisoners and prisons, Japanese. | World War, 1939-1945 — Participation, Australian. 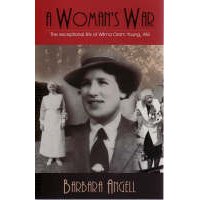 Woman’s War, A : The Exceptional Life of Wilma Oram Young, AM