Home › Shop › HISTORY › Life and Work of Richard John Seddon, Premier of New Zealand 1893-1906. With a history of the Liberal Party in New Zealand.

Life and Work of Richard John Seddon, Premier of New Zealand 1893-1906. With a history of the Liberal Party in New Zealand.

Richard John Seddon, (RJS), one of New Zealand’s most popular and charismatic Prime Minsters. Born in Lancashire, England in 1845 he emigrated to Australia after serving a five year engineering apprenticeship. Rich gold-fields on the NZ West Coast attracted RJS to Hokitika. Unlucky on the gold field he set up as a store-keeper, doing well in that trade. In 1874 the Kumara gold rush attracted RJS and his business there, where he prospered, becoming the most influential figure in the area. Later he practiced as a miners’s advocate before the Warden’s Courts, iniating his future in politics. He joined the short-lived Westland Provincial Council and when that system was abandoned in 1875 for a NZ Government based in Wellington and was elected to the Parliament in 1879 as a West Coast representative of the Liberal Party. The 1890 general election placed a Liberal Government in power and with John Ballance as Premier RJS was appointed Minister of Mines, Public Works and Defence. His rise was rapid and he became Premier in mid-1893 following the death of Ballance. In 1906, after 14 years as Premier his health was suffering under the weight of his responsibilities and he took leave in Australia. 0n June 1, at Sydney, he boarded a steamer to return to NZ but died suddenly as it left the harbour. In an introduction to the book Sir Joseph Ward, who became Premier, said of RJS that Politics aside there were few who could not like or love him.”. He added this comment made by RJS before his last election: “”The cardinal aim of government is to provide the conditions which will reduce want 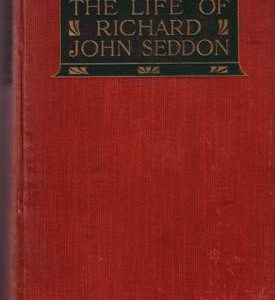 Life and Work of Richard John Seddon, Premier of New Zealand 1893-1906. With a history of the Liberal Party in New Zealand.