Home › Shop › LATEST ARRIVALS › An Old Dog for A Hard Road: The Inside Story of the 1979 Repco Round-Australia Reliability Trial

An Old Dog for A Hard Road: The Inside Story of the 1979 Repco Round-Australia Reliability Trial

The 1979 Round Australia Trial, officially the Repco Reliability Trial was the twelfth running of the Round Australia Trial. The rally took place between 5 and 19 August 1979. The event covered 19,000 kilometres around Australia. It was won by Peter Brock, Matt Philip and Noel Richards, driving a Holden Commodore.
150 p. : ill., port. ; 26 cm. #080522 First Edition
Automobile racing, Automobile rallies — Australia., Repco round-Australia Reliability Trial; (1979)
The 1979 Repco Reliability Trial, often known as the 79 Round Australia Trial, started at the Melbourne Showgrounds on Sunday August 5th and finished back there on Sunday August 19th after completing a full “lap” of Australia and some 19,000 km. It is generally considered to have been the toughest ever long distance rally in Australia. Of the 167 crews that started the event, 92 were classified as finishers, however only 13 cars completed the entire route.

The first and last days of competition took place in Victoria with competitive stages initially in the Puckapunyal Forest near Tooborac, a special stage at Creswick, another near Heywood, and then a number of trial stages along the Vic/SA border. The final night of competition before the effective finish in Albury used roads in the Victorian Alps before a special stage in the Stanley Plantation near Beechworth.

The winners of the event were Victorians Peter Brock, Matt Philip and Noel Richards in the 05 MHDT Commodore. Victorians also finished 6th (Wes Nalder, Ian Richards and Geoff Boyd in a Toyota Celica), 10th (Gil Davis, Phil Eather and Graham Toner in a Datsun 180B) and 11th (Bob Watson and Garry Harrowfield in a Peugeot 504 Diesel).

Many other Victorians competed and performed well. Geoff Portman with his Shepparton crew of Doug Thompson and John Hammond lead the event into Adelaide in their Stanza but struck problems on the Nullarbor. The continued in the top ten until crashing before Sydney and dropping 7 controls. The best placed Victorians outside the top 13 were Hamilton based crew of Peter Hurrey and David Geddes, dropping only 5 controls in their Celica. 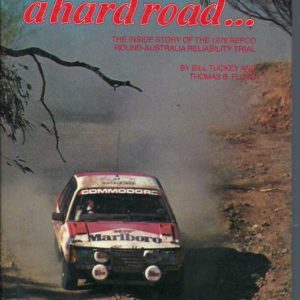 An Old Dog for A Hard Road: The Inside Story of the 1979 Repco Round-Australia Reliability Trial