Australias Secret War, tells the shocking, true, but until now largely suppressed and hidden story of the war waged from 1939 to 1945 by a number of key Australian trade unions against their own society and against the men and women of their own fighting forces at the time of its gravest peril. His conclusions are based on a broad range of sources, from letters and first-person interviews between the author and ex-servicemen to official and unofficial documents from the archives of World War II. Between 1939 and 1945 virtually every major Australian warship, including at different times its entire force of cruisers, was targeted by strikes, go-slows and sabotage. Australian soldiers operating in New Guinea and the Pacific Islands went without food, radio equipment and munitions, and Australian warships sailed to and from combat zones without ammunition, because of strikes at home. Planned rescue missions for Australian prisoners-of-war in Borneo were abandoned because wharf strikes left rescuers without heavy weapons. Officers had to restrain Australian and American troops from killing striking trade unionists. 340 pages ; 23 cm #0317/0318/0519/0819/1119/0520/250122/060522 SCARCE Prime Minister’s Literary Awards, australian history, winner, 2014.
Labor unions — Political activity — Australia — History — 20th century. | World War, 1939-1945 — Australia. | Sabotage — Australia. | Australia — Armed Forces — History. | Australian 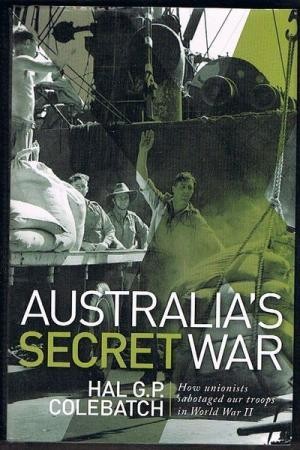