ABC and BBC broadcaster, Chester Wilmot, is regarded as the greatest war correspondent of the Second World War. This collection of his broadcasts tells the story of the Australian and British actions in the Middle East, the tragic Greek and Crete campaigns and Kokoda, where he went up the Track, accompanied by legendary cameraman Damian Parer and Melbourne Sun correspondent Osmar White. An outstanding broadcaster and reporter, Wilmot was master of both descriptions of action and close analysis of strategy. He broadcast interviews of troops on the ground at a time when a description read by an announcer had been considered sufficient. Intense, argumentative, often dogmatic, but never personal, Wilmot was unflinching in his exposure of high command bungles. His championing of the cause of…
Reginald William Winchester Wilmot (21 June 1911 – 10 January 1954) was an Australian war correspondent who reported for the BBC and the ABC during the Second World War. After the war he continued to work as a broadcast reporter, and wrote a well-appreciated book about the liberation of Europe. He was killed in the crash of a BOAC Comet (Yoke Peter) over the Mediterranean Sea.
xi, 401 p. : ill., ports. ; 25 cm. #0721
War correspondents — Australia. | World War, 1939-1945 — Personal narratives, Australian. | World War, 1939-1945 — Journalism, Military. | World War, 1939-1945 — Journalists. 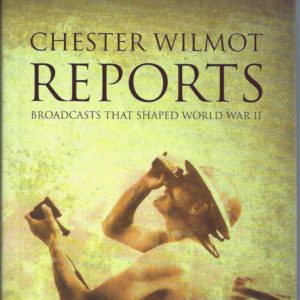