The 2/4th Machine Gun Battalion was an Australian Army unit raised for service with the all volunteer Second Australian Imperial Force (2nd AIF) during the Second World War. Formed in late 1940 as part of the 8th Division, the battalion was established to provide direct fire support to the division’s infantry brigades. It was the fourth, and last, such unit raised within the 2nd AIF. The unit’s personnel were largely drawn from the state of Western Australia and after formation, the battalion concentrated near Perth for basic individual training before moving to the Adelaide Hills to complete more advance manoeuvres.

In late 1941, amidst concerns of war in the Pacific, the unit was deployed north to Darwin in the Northern Territory, where they undertook garrison duties in the weeks following Japan’s entry into the war. Following Japanese landings in Malaya, the 2/4th embarked from Darwin and were transferred to Malaya, arriving in Singapore in the final days of the fighting on the peninsula. In the wake of the withdrawal of British and Commonwealth forces to the island, the battalion was hastily deployed in support of the two Australian brigades—the 22nd and 27th Brigades—in the north-western sector of the island. During the initial Japanese landing, elements of the battalion were heavily engaged around the landing beaches but they were outnumbered and over the course of the week the defenders were pushed back towards the centre of the island, towards the city of Singapore. They suffered heavy casualties during this time, before subsequently becoming prisoners of war after the fall of Singapore.

Meanwhile, a detachment of about 100 men from the battalion, who had been left behind in Australia when it deployed to Singapore, also took part in the fighting on Java. After a brief campaign, the majority of these personnel were taken into captivity when the Allied forces were overwhelmed around Buitenzorg in mid-March 1942, although some attempted to fight on as guerillas. Eventually these men were either killed or captured; prisoners remained in Japanese captivity until the end of the war in August 1945. During the three-and-a-half years they were held by the Japanese, members of the 2/4th were sent to prison camps around the Pacific, where they were used as slave labour and subjected to harsh conditions and extreme brutality. After the war, the surviving members of the battalion were returned to Australia but the 2/4th was not re-raised.
The 2/4th Machine Gun Battalion was one of four machine gun battalions raised as part of the all volunteer Second Australian Imperial Force (2nd AIF) for service overseas during the Second World War.[1][Note 1] Motorised infantry units, equipped with wheeled motor vehicles and tracked carriers, the machine gun battalions were formed to provide a greater level of fire support than that ordinarily available within infantry battalions.[3] Developed by the British Army, the concept had its genesis in the Australian Army during the Gallipoli Campaign in 1915, when the machine guns assigned to the infantry battalions—initially two and then four—had been grouped together and co-ordinated at brigade level, to help compensate for the lack of artillery support. On the Western Front, the concept had evolved through the establishment of machine gun companies in 1916 and finally, in 1918, to the establishment of machine gun battalions. Similar formations had also been established among the Australian Light Horse units serving in the Sinai and Palestine Campaign.[3] During the inter-war years, the machine gun battalions had been deemed unnecessary. They were not re-raised when the Army was reorganised in 1921 but in 1937, as the Australian Army looked to expand owing to fears of war in Europe, four such units were formed within the part-time Militia, by converting light horse units and motorising them. Several other Militia machine gun battalions were also raised as new units later after the Second World War began.[Note 2] These were formed by consolidating the machine gun companies assigned to a number of infantry battalions, and other light horse units were also converted into the role for use as garrison forces. Within the 2nd AIF—Australia’s overseas expeditionary force—the decision was made to raise four machine gun battalions as corps troops that were usually allocated at a rate of one per division; several of the Militia units were also later designated Australian Imperial Force units, after the majority of their personnel volunteered for overseas service. This meant that they could be deployed outside of Australian territory even though they were not 2nd AIF units.
In mid-1940, amid the tide of German successes in Europe, there was an influx of volunteers for the 2nd AIF. As a result, the Australian government decided to raise a third volunteer division for overseas service, named the 8th Division.[7][8] Established around three infantry brigades—the 22nd, 23rd and 27th—the division was supported by corps troops including engineers, cavalry, artillery, pioneers and a machine gun battalion for direct fire support.[8] Within this formation, the 2/4th Machine Gun Battalion came into being on 25 November 1940, when Lieutenant Colonel Michael Anketell, a First World War veteran who had commanded a Militia infantry battalion before the war, established his headquarters at Northam Camp, near Perth, Western Australia. While the rest of the 8th Division had drawn its personnel mainly from the more populous eastern states of New South Wales and Victoria, the decision was made to select personnel for the 2/4th only from those who were already enlisted and conducting training in the west. While potentially parochial, it was a primarily a pragmatic decision to reduce the time it would take to concentrate the unit and complete its training.[9][10]

Like most 2nd AIF units, the 2/4th drew its cadre staff of officers and senior non-commissioned officers (NCOs) from volunteers from local Militia units. These were augmented by partially trained Other Ranks (ORs) from the three local recruit training depots; the first batch of these, numbering 394 men, arrived at Northam on 27 November and a further 262 marched in on 4 December. As the battalion was brought up to its authorised strength of around 800 men,[11] personnel were formed into four machine gun companies, ‘A’ to ‘D’, under a headquarters company consisting of several specialist platoons—including signals and anti-aircraft platoons—and battalion headquarters.[12] There were no platoon commanders until a contingent arrived from the regional Officer Training Units. Initially training was hampered by a lack of equipment—only 12 of 48 Vickers machine guns assigned to the battalion were available—so at the start the focus was on individual rather than collective training. As more stores arrived, training accelerated with the help of experienced Militia NCOs and First World War veterans, who were brought in to share their experiences with the new troops.[13] Just before Christmas and New Year’s leave, the battalion received its distinctive unit colour patch: a black and gold triangle.[14]

Early in the New Year, the establishment of the battalion’s command formation was completed with the appointment of subalterns as platoon commanders, following their return from their first appointment courses. The training continuum evolved with the establishment of an NCO school and various specialist courses, including range finding and transport; a bugle and drum band was also raised.[15] In February 1941, training focused upon skill-at-arms, before undertaking a 60-mile (97 km) march from Northam to Perth, which was conducted over the course of three days and was undertaken, according to the Australian War Memorial, to test the “physical fitness and endurance of the personnel and officers” and “the efficiency of the battalion’s motor transport and administration personnel”.[16] Upon their return, training progressed to field firing, night manoeuvres, portage, defensive exercises and further specialised training, continuing until July, by which time the battalion was considered ready for deployment.[17] That month it received orders to move to Adelaide, South Australia.[10] Proceeding in four drafts—one each on the transports Katoomba and Duntroon and two by rail—they were established at Woodside,[18] in the Adelaide Hills, by the end of the month.[19] The battalion endured a bitter winter, conducting field exercises amidst the steep wooded slopes of the Mount Lofty Range; these became more tactically complex and physically demanding as Anketell worked the battalion up to a peak of efficiency, in preparation for deployment amidst growing tensions in the Pacific.[20] The Japanese attack came in the night of 8/9 February, after a heavy artillery and aerial bombardment that had lasted throughout the day. ‘D’ Company, positioned in various locations in support of the Australian 22nd Brigade in the north-western area, found themselves in the thick of the fighting as the Japanese concentrated their landing on the Australian 8th Division front.[42] Understrength and stretched out across a large frontage over ground that was unsuited to defence, the Australians were almost immediately under pressure. Shortly after 8:00 pm, 13 Platoon, supporting the 2/20th Infantry Battalion around the head of the Lim Chu Kang Road, was confronted by a large number of landing barges filled with Japanese assault troops.[43] For almost six hours, the platoon, under Lieutenant Eric Wankey, fought a desperate action to repel the invaders. With four machine guns, as well as personal small arms and grenades, the platoon inflicted heavy casualties on the Japanese and sank several barges. Despite heavy casualties from Japanese mortar and machine gun fire, they kept fighting until early in the morning on 9 February when, threatened with being outflanked and low on ammunition—each gun had fired over 10,000 rounds—and having had one gun knocked out, the platoon was forced to withdraw. Destroying their equipment as they went to prevent it from being captured, the platoon was forced to withdraw in contact, taking their wounded with them; the action was later rewarded with a Military Cross for the platoon commander, who was badly wounded after taking over one of the machine guns after its crew had been wounded.[44][45]

Near the Sungei Murai (Murai River), 15 Platoon—under Lieutenant John Meiklejohn—had been stationed in support of a company from the 2/18th Infantry Battalion, in a thickly wooded area with low hills and many inlets. 15 Platoon established an enfilade formation near the shore, with its machine guns distributed in two sections on a north–south axis, facing a narrow peninsula, between the mouth of the Murai and a small inlet.[46] According to the official history by Lionel Wigmore, after a Japanese landing party approached, the southern section under Meiklejohn “opened fire against six approaching barges, and kept on firing for two hours, despite retaliation by hand grenades, as the Japanese landed and crossed the neck of the peninsula”.[47] As was the case elsewhere in the extremely wide sector assigned to the 22nd Brigade, many Japanese landing parties were able to outflank the thinly-spread Australian positions. At risk of being cut off and with ammunition running low, Meiklejohn ordered the southern section to retreat. According to Wigmore: “Meiklejohn led his section along a jungle path where they came upon a party of Japanese resting. He shot some with his revolver, and another was knocked out with a swing from a [machine gun] tripod, but Meiklejohn lost his life in attempting to cover his section’s withdrawal.”[47] The northern section of 15 Platoon held its ground “until it was informed that a near-by infantry platoon was almost surrounded, and about to withdraw”.[47] Forced to retreat without its machine guns, the northern section also found Japanese troops blocking its path.[47][48] When Private Cliff Spackman was attacked by a Japanese officer wielding a sword, Spackman “bayoneted him”, took the sword and used it against another Japanese soldier.[47] 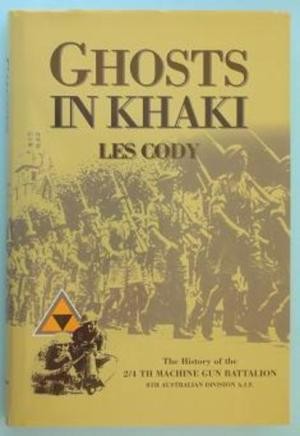