View cart “EXCELLENT CONNECTIONS : A History of BUNBURY, Western Australia 1836-1990” has been added to your cart.

O’Malley was of American origin and arrived in Australia in 1888. He worked as an insurance salesman before entering politics, in both professions making use of his knack for oratory and publicity stunts. He served a single term in the South Australian House of Assembly (1896–1899), before moving to Tasmania and winning election to the House of Representatives at the inaugural 1901 federal election. O’Malley was a political radical, and joined the Labor Party upon its creation despite his status as one of the wealthiest members of parliament. He was a keen proponent of banking reform, especially the creation of a national bank, and successfully lobbied for its inclusion in the Labor platform. He was dissatisfied with the initial form of the Commonwealth Bank, but later proclaimed himself as its “father”; the amount of credit he deserves for its creation has been debated.

After Labor won the 1910 federal election, O’Malley was elected to cabinet by the party caucus over the objections of Prime Minister Andrew Fisher. As home affairs minister, he oversaw the construction of the Trans-Australian Railway and the early development of the new national capital, including the design competition won by Walter Burley Griffin. He banned alcohol in the Australian Capital Territory. O’Malley’s second term as home affairs minister was troublesome, marked by conflict with Prime Minister Billy Hughes among others. He remained loyal to the ALP during the 1916 party split, but lost his seat at the 1917 election. O’Malley was the last surviving member of the first federal parliament and spent his retirement defending his legacy. His political views combined with his personal background and personality traits made him a controversial figure during his career, and his life has continued to attract public interest. 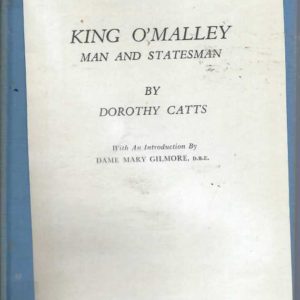