What’s Wrong with ANZAC?: The Militarisation of Australian History

In recent years Anzac – an idea as much as an actual army corps – has become the dominant force within Australian history, overshadowing everything else. The commemoration of Anzac Day is bigger than ever, while Remembrance Day, VE Day, VP Day and other military anniversaries grow in significance each year. Pilgrimages to Gallipoli, the Somme and Kokoda are commonplace and popular military history dominates the bestseller lists. Anzac has seemingly become a sacred, untouchable element of the nation. In this brave and controversial book, some of Australia’s leading historians dare to criticise Anzac. They show that the Anzac obsession distorts the rest of Australia’s history. They investigate official sponsorship of Anzac through commemoration and education and show that this has mobilised it as a conservative force, often for political ends. Finally – and perhaps most devastatingly – they ask whether the grief and loss associated with bloodshed on foreign shores was all worth it.
Introduction: What have you done for your country? / Marilyn Lake
1. Are nations really made in war? / Henry Reynolds
2. Colonial Cassandras: why weren’t the warnings heeded? / Henry Reynolds
3. Whatever happened to the anti-war movement? / Carina Donaldson and Marilyn Lake
4. Why do we get so emotional about Anzac? / Joy Damousi
5. Anzac Day: how did it become Australia’s national day? / Mark McKenna
6. How do schoolchildren learn about the spirit of Anzac? / Marilyn Lake
Epilogue: moving on? / Henry Reynolds and Marilyn Lake.
viii, 183 p. ; 24 cm. Includes bibliographical references (p. 168-176) and index. #280422
Great Britain. Army. Australian and New Zealand Army Corps. | Anzac Day. | Collective memory. | World War, 1914-1918 — Historiography. | History — Psychological aspects. | Australia — Historiography. 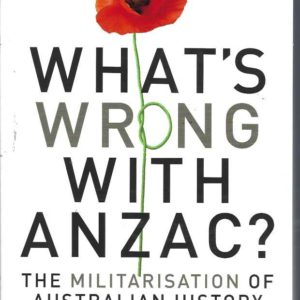 What’s Wrong with ANZAC?: The Militarisation of Australian History