When someone leaves a little boy in a basket right outside Asterix’s hut, it’s two Gauls and a baby in the days of the Roman Empire! Though Asterix and Obelix have more experience in whopping legionnaires than in diapering infants, they do their best. Also new to child care is the sneaky Prefect of Gaul, Crismus Cactus, who’s masquerading as a nursemaid. Why are the Romans trying to get the baby? And, what plot is the treacherous Brutus hatching against Caesar? Asterix must find out. Even though the Gaulish will burn down before the truth comes to light, all ends well with Caesar promising to rebuild it.and give a grand banquet on board Cleopatra’s galley!

The Asterix books represent the very summit of our achievement as a literary race. In Asterix one finds all of human life. The fact that the books were written originally in French is no matter. I have read them all in many languages and, like all great literature, they are best in English. Anthea Bell and Derek Hockridge, Asterix’s translators since the very beginning, have made great books into eternal flames.–THE TIMES A cartoon drawn with such supreme artistry, and a text layered with such glorious wordplay, satire and historical and political allusion that no reader should ever feel like they’ve outgrown it.–TIME OUT #0521 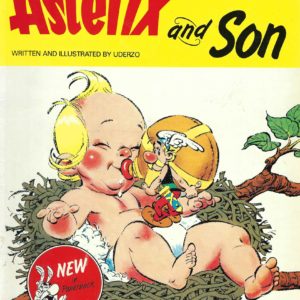