BLUE LOTUS, The : The Adventures of Tintin (Le Lotus bleu)

In The Blue Lotus (1936), as he chases drug traffickers all the way to China, Tintin meets a young Chinese boy who will help him get rid of all his prejudices. Rastapopoulos will reveal himself as a ferocious enemy and Tintin will in fact meet him again later… Hergé, constantly improving his story telling and drawing techniques, will give primary importance to scenario and documentation. His quest for authenticity shows throughout, and he judges without any complacency the expansionist politics of Japan in its devastating conflict with China. Tintin’s ongoing battle against the traffickers takes him to China where he meets Chang. Chang is Hergé’s friend in real life. This is he who helped Hergé to prepare this adventure where Tintin will need determination, audacity and intelligence to evade all the traps set on his road. #0115/1219/0120/0220/0121/0621

The Blue Lotus (French: Le Lotus bleu) is the fifth volume of The Adventures of Tintin, the comics series by Belgian cartoonist Hergé. Commissioned by the conservative Belgian newspaper Le Vingtième Siècle for its children’s supplement Le Petit Vingtième, it was serialised weekly from August 1934 to October 1935 before being published in a collected volume by Casterman in 1936. Continuing where the plot of the previous story, Cigars of the Pharaoh, left off, the story tells of young Belgian reporter Tintin and his dog Snowy, who are invited to China in the midst of the 1931 Japanese invasion, where he reveals the machinations of Japanese spies and uncovers a drug-smuggling ring.

In creating The Blue Lotus, Hergé exhibited a newfound emphasis on accuracy and documentation in his portrayal of foreign societies. He was heavily influenced by his close friend Zhang Chongren, a Chinese student studying in Belgium, and the work both satirises common European misconceptions about China as well as criticising the actions of the Japanese invaders. The Blue Lotus was a commercial success in Belgium and was soon serialised in France and Switzerland, while news of the book led to the Chinese political leader Chiang Kai-shek inviting Hergé to visit China itself. Hergé continued The Adventures of Tintin with The Broken Ear, while the series itself became a defining part of the Franco-Belgian comics tradition. In 1946, The Blue Lotus was partially re-drawn and coloured by the cartoonist and his team of assistants; during this process a number of minor plot elements were changed. The adventure introduces the recurring characters J.M. Dawson and Chang Chong-Chen. The story was adapted for a 1991 episode of the Ellipse/Nelvana animated series The Adventures of Tintin. Critical analysis of the story has been positive, with various commentators considering it to be one of Hergé’s finest works.

The synopsis continues a plot begun in Cigars of the Pharaoh.

Staying at the palace of the Maharaja of Gaipajama in India, Tintin is approached by a visitor from Shanghai in China. The visitor supplies him with the name of Mitsuhirato, a Japanese businessman based in Shanghai, but before finishing his message is hit by a dart dipped in Rajaijah, the “poison of madness”. Tintin and his fox terrier Snowy travel to Shanghai to meet Mitsuhirato, who warns them that the Maharajah is in danger and that they should return to India. Surviving several attempts on his life by mysterious assailants, Tintin attempts to leave for India by boat, but is kidnapped. His abductors reveal themselves as members of a secret society known as the Sons of the Dragon, who are devoted to combating the opium trade. Their leader, Wang Chen-Yee, explains to Tintin that Mitsuhirato is both a Japanese spy and an opium smuggler, and enlists Tintin in their fight to stop him. Tintin agrees, and spies on Mitsuhirato at the Blue Lotus opium den. Following the spy, he discovers him blowing up a Chinese railway. The Japanese government uses this as an excuse to invade Northern China, taking Shanghai under its control.[1]

Tintin is captured by Mitsuhirato, who plans to poison him with Rajaijah; however, one of Wang’s agents swaps the poison for coloured water, and Tintin escapes unscathed. When Mitsuhirato discovers the deception, he convinces J.M. Dawson, the corrupt Chief of Police at the Shanghai International Settlement, to put a warrant out for Tintin’s arrest. Meanwhile, Tintin enters the Settlement in search for Professor Fang Hsi-ying, an expert on poisons who he hopes can develop a cure for Rajaijah, but discovers that he has been kidnapped. Dawson’s police arrest Tintin and hand him over to the Japanese, who sentence him to death before he is rescued by Wang.[2]

Travelling to Hukow with the ransom money for Fang, Tintin comes across a flood that has destroyed a village and rescues a young Chinese orphan, Chang Chong-Chen. Chang accompanies Tintin to Hukow, where one of Mitsuhirato’s spies ambushes them; they realise that it was a trap and that Fang was not there. Meanwhile, the detectives Thomson and Thompson are employed by Dawson to arrest Tintin, but fail on multiple occasions. Returning to Shanghai, Tintin intends to confront Mitsuhirato, and allows himself to be captured by him. Being held prisoner at The Blue Lotus, he discovers that Mitsuhirato is in league with the film director Rastapopoulos, who reveals that he is the leader of the international opium smuggling gang that Tintin had pursued in Egypt and India, and was the man assumed to have fallen to his death during the foiled kidnapping of the Maharaja’s son. However, in accordance with Tintin’s plan, Chang and the Sons of the Dragon rescue Tintin and Fang; Rastapopoulos is arrested while Mitsuhirato commits seppuku. Fang develops a cure for Rajaijah, while Wang adopts Chang as his son. Tintin’s report on Mitsuhirato’s activities leads to accusations against Japan, which withdraws from the League of Nations in protest.[3]

Georges Remi—best known under the pen name Hergé—was employed as editor and illustrator of Le Petit Vingtième (“The Little Twentieth“),[4] a children’s supplement to Le Vingtième Siècle (“The Twentieth Century“), a staunchly Roman Catholic, conservative Belgian newspaper based in Hergé’s native Brussels which was run by the Abbé Norbert Wallez. In 1929, Hergé began The Adventures of Tintin comic strip for Le Petit Vingtième, about the exploits of fictional young Belgian reporter Tintin. Wallez ordered Hergé to set his first adventure in the Soviet Union to act as anti-socialist propaganda for children (Tintin in the Land of the Soviets),[5] to set his second adventure in the Belgian Congo to encourage colonial sentiment (Tintin in the Congo),[6] and to set his third adventure in the United States to use the story as a denunciation of American capitalism (Tintin in America).[7] On 24 November 1932, Le Petit Vingtième published a fictional interview with Tintin in which the reporter announced that he would travel to China via Egypt, India, Sri Lanka, and Indochina.[8] This plotline resulted in Tintin in the Orient, the first part of which was an Adventure set in Egypt, Arabia, and India that Hergé later titled Cigars of the Pharaoh. Cigars ceased publication in Le Petit Vingtième in February 1934, and Hergé next provided the standalone story Popol out West for the newspaper.[9] The Blue Lotus was the second half of the Tintin in the Orient story that Hergé had begun with Cigars of the Pharaoh.[10]

However, Hergé knew as little about China as he did about the Soviet Union or the Belgian Congo.[11] At the time most Belgians held to a negative stereotype of China, viewing it as “a distant continent of a nation, barbaric, overpopulated, and inscrutable”, and Hergé had long believed this view.[12] He had included Chinese characters in two previous Adventures, in both instances depicting them according to traditional European clichés. In Tintin in the Land of the Soviets, he included two pigtailed Chinese men hired by the Bolsheviks to torture Tintin, while in Tintin in America he featured two Chinese hoodlums who plotted to eat Snowy.[13] Hergé learned a bit about the country from Albert Londres‘ book China Madness, based on Londres’ experiences in the country.[12] He was also influenced in his portrayal of China by the 1933 German film Flüchtlinge (At the End of the World).[14]

“It was at the time of The Blue Lotus that I discovered a new world. For me up to then, China was peopled by a vague, slit-eyed people who were very cruel, who would eat swallows’ nests, wear pig-tails and throw children into rivers… I was influenced by the pictures and stories of the Boxer Uprising, where the accent was always on the cruelty of the yellow people, and this made a deep impact”.

Learning of Hergé’s intention to set the next Adventure in China, Abbot Léon Gosset, a Roman Catholic chaplain to the Chinese students at the Catholic University of Leuven, contacted Hergé and asked him to be cautious in his depiction of the country. His students read Le Petit Vingtième and he thought it would be counterproductive if Hergé continued to propagate negative stereotypes about the Chinese people. Hergé was sensitive to Gosset’s ideas, and Gosset proceeded to put him in touch with two of his Chinese students, Arnold Chiao Ch’eng-Chih and his wife Susan Lin. He also gave him the address of a Chinese student a year Hergé’s junior, Zhang Chongren.[16] The pair first met on 1 May 1934, soon becoming close friends and spending every Sunday afternoon with each other for over a year.[17] Zhang later commented that he and Hergé became akin to “two brothers”.[18] A student of painting and sculpture at Brussels’ Royal Museums of Fine Arts, Zhang taught Hergé about Chinese artistic styles, giving him a set of traditional Chinese brushes and explaining to him the art of painting a tree and Chinese calligraphy, alongside explaining the tenets of Taoist philosophy. Both his artistic and philosophical training under Zhang would have a profound effect on Hergé.[19]

Hergé had also established contact with Father Édouard Neut, hosteller at the St. Andrew’s Abbey near Bruges. Neut had a special interest in China, and was excited by Hergé’s latest venture, commenting that it could contribute to “a work of inter-racial understanding and true friendship between Orientals and whites”.[20] He sent him two books, Father Thadée’s Aux origines du conflict mandchou (On the Origins of the Manchu Conflict) and Zheng Zheng’s Ma Mère (My Mother), a first-hand account of Chinese family life.[20] He also sent Hergé a 1932 article discussing the differences between Chinese and Japanese cultures.[20] At the time, Neut was working as the assistant of Lou Tseng-Tsiang, a former prime minister of China who had become a monk at St. Andrew’s Abbey.[21] Mainstream Western press was broadly sympathetic to the Japanese cause, viewing them as a bulwark against the Soviet Union, a view that Hergé was to eschew.[22] 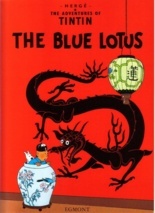 BLUE LOTUS, The : The Adventures of Tintin (Le Lotus bleu)