LAND OF BLACK GOLD :The Adventures of Tintin

All around the world car engines explode: the gas must have been tempered with! We are on the brink of an oil crisis. In the Middle East, Sheik Bab El Ehr tries to overthrow Sheik Ben Kalish Ezab. This is enough for Tintin to drop everything and set off to the Land of Black Gold (1950) ‘Hergé’ was born Georges Remi on 22 May, 1907 in Etterbeek, a suburb of Brussels, in Belgium. After leaving school, he worked for the daily newspaper, Le XXe Siècle (The 20th Century). He was responsibe the for the section of the newspaper designed for children. Tintin, the main character in his works, was introduced on January 10, 1929 in a story entitled ‘Tintin in the Land of the Soviets.’ Each story ran as a comic strip in the newspaper and then was published as a book. Some of these books were adapted for the small screen including The Crab With The Golden Claws, Star of Mystery, Red Rakham’s Treasure, Black Island, Objective Moon and The Calculus Affair. French TV produced longer versions of twenty of the books in 1992, which have been broadcast in over fifty countries. On 3 March, 1983, he died in Brussels. At the time of his death, he was working on Tintin and the Alpha-Art, which was published in an unfinished form. #1219R/0220 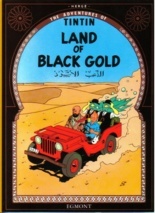 LAND OF BLACK GOLD :The Adventures of Tintin