The Broken Ear (French: L’Oreille cassée, originally published in English as Tintin and the Broken Ear) is the sixth volume of The Adventures of Tintin, the comics series by the Belgian cartoonist Hergé. Commissioned by the conservative Belgian newspaper Le Vingtième Siècle for its children’s supplement Le Petit Vingtième, it was serialised weekly from December 1935 to February 1937. The story tells of young Belgian reporter Tintin and his dog Snowy, as he searches for a South American fetish, identifiable by its broken right ear, and pursues thieves who have stolen it. In doing so, he ends up in the fictional nation of San Theodoros, where he becomes embroiled in a war and discovers the Arumbaya tribe deep in the forest.

The Broken Ear was a commercial success and was published in book form shortly after its conclusion. Hergé continued The Adventures of Tintin with The Black Island, while the series itself became a defining part of the Franco-Belgian comics tradition. In 1943, The Broken Ear was coloured and reformatted for republication by Casterman. Commentators have praised the book for showcasing Hergé’s then-newfound commitment to a clear narrative structure and strives for historical and technical accuracy, but believe that its use of humour comparable to earlier Adventures renders it inferior to the previous volume, The Blue Lotus. The Broken Ear introduces the recurring character General Alcazar, and was the first to include fictional countries. The story was adapted for both the 1956 Belvision animation, Hergé’s Adventures of Tintin, and for the 1991 Ellipse/Nelvana animated series The Adventures of Tintin.

A fetish created by the Arumbaya tribe of South America is stolen from Brussels’ Museum of Ethnography, only to be returned the following day. Tintin realizes that the replacement is a fake, and draws a connection with a local sculptor, Jacob Balthazar, who has just been murdered. Balthazar’s parrot – the only witness to the murder – is obtained by two Hispanic men, Alonso and Ramón, who try to kill Tintin when he begins to investigate their connection to the crime.[1] From the parrot, Alonso and Ramón discover Balthazar’s murderer is Rodrigo Tortilla, and they proceed to follow him aboard a ship bound for South America. There, they murder Tortilla, but find that he didn’t have the original fetish. Tintin, however, follows them, and arranges their arrest when the ship docks at Los Dopicas, capital of San Theodoros.[2] Nevertheless, the corrupt colonel in charge of the arrest allows the antagonists to slip away, and detains Tintin.

In the city, Tintin is framed as a terrorist, arrested, and sentenced to death by firing squad. Tintin survives when a revolution topples the government, and the new leader, General Alcazar, appoints Tintin to be his aide-de-camp. Alonso and Ramón capture Tintin, and interrogate him in the hope of locating the missing fetish, but they only end up briefly put behind bars by him.[3] As aide-de-camp, Tintin opposes the proposed decision of San Theodoros claiming the supposedly oil rich Gran Chapo, as this would cause a war between San Theodoros and neighboring Nuevo Rico, and he is framed as a traitor by warmongering oil and weapon companies. Nevertheless, Tintin’s new friend Pablo frees him from imprisonment, allowing for Tintin to flee to Nuevo Rico.[4] However, in the process, he inadvertently causes events that, partially as its government considered claiming Gran Chapo for its oil as well, have Nuevo Rico start a war between it and San Theodoros. Once within Nuevo Rico, Tintin decides to enter the forest and find the Arumbaya tribe, hoping they can explain to him why people wish to steal the fetish. Finding a British explorer, Ridgewell, living among the Arumbaya, Tintin learns that a diamond was hidden inside the statue.[5]

As the war between San Theodoros and Nuevo Rico ends when Gran Chapo is discovered to have no oil, Tintin returns to Belgium after a brief encounter with Alonso and Ramón. There, Tintin discovers Balthazar’s brother has been producing a range of exact replicas of the fetish, which he had discovered among his deceased brother’s belongings. Tintin learns it was purchased from him by Samuel Goldbarr, a wealthy American now returning to the United States with it by ship. Catching up to the boat, Tintin finds Alonso and Ramón aboard. His struggle with them for the possession of the fetish results in it smashing on the floor, upon which the diamond hidden in it rolls overboard into the sea. Alonso and Ramón try to kill Tintin for making them lose it, and the three of them accidentally fall overboard as well. Tintin is rescued, but Alonso and Ramón drown. Goldbarr allows Tintin to return the stolen fetish to the museum, where it is repaired and put back on display, albeit comically damaged.[6] #080122 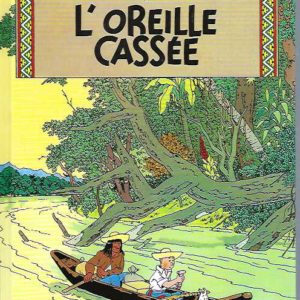